There’s nothing I like more than an opposites attracts trope, and in Can’t Stand the Heat ( book 3 in the Will Cook for Love Series), I had a doozy of a bi-polar couple! And by that I mean they were at two opposite poles of the personality spectrum. Stacy, cool and calm, nothing fazes her and everyone loves her, and Nikko, angry, gruff, prone to outbursts and the air could make him mad! But there’s a reason for his arrogance and Stacy is just the gal to figure out what it is. This snippet is a little longer than usual but because of the dynamics of their budding relationship, I wanted to present it in its entirety.

He wasn’t looking at her now with his usual aggravated glare, or even the doubtful one he’d given her just moments before. Nor was his expression simple curiosity at her expertise.

No, what was in his eyes was something she’d never expected to see from this man: need.

A stab of unexpected hunger, so piercing and swift, sliced right through her midsection and dropped lower, tickling the area between her thighs.

And the hunger had nothing to do with the fact she hadn’t eaten anything in hours.

Nikko took a step forward, then another, until he stopped directly in front of her.

Stacy had to tip her head back to maintain eye contact with him. Hypnotized by the intensity in his eyes, she couldn’t look away from it; didn’t want to.

“Yes,” he said, his breath drifting over her, making her insides flutter like a flimsy curtain battling a sudden breeze. “I remember that. I remember you massaging my leg for some time.” He moved in closer, their torsos just a hair’s width from her breasts scraping along his chest.

“I remember the feel of your hands on my leg. Kneading. Rubbing. Your fingers, gliding along my muscles, up and down. Helping me. Easing my pain.”

“I—I…” She backed up a step and hit the dresser, her spine flattening against it. She braced her hands behind her, the tips of her fingers landing across one drawer. “I’m glad I did. Help, I mean.”

Was that her voice? It sounded as if she’d just run a marathon. Uphill.  In thin air.

Nikko’s hands rose, slowly, purposefully, and came to rest on the top of the dresser, bracketing her between them, effectively imprisoning her. With every breath she took now, her torso grazed his. His knees bumped hers as his head lowered, his eyes never moving from her own. “Easing my pain,” he repeated softly, as if she’d hadn’t spoken, “and making me…want.” His lips floated a breath above hers, then touched hers once, just a brief buss; a sample; a promise. “Want…you.”

In the next breath he fulfilled that promise by resting his mouth fully against hers. Soft yet powerful, seductive and masterful, his lips glided over hers. Pressed. Savored.

Stacy answered by relaxing against him, moving into the kiss without thought, without reservation, without worry.

He kissed like a man who knew what he was doing. He demanded nothing of her than to simply let him pleasure her mouth, and yet she poured everything inside her, offered every bit of herself into kissing him back without the slightest bit of hesitation or concern.

He shifted, changed the angle of his head, and lifted his hands from the dresser to cup her cheeks between them. Tipping her head back, her body arched as he deepened the kiss, greedily parting her lips with his tongue then forging between them, overwhelming her, claiming her.

Under the thin robe her nipples came to two hard points as his tongue tugged and wound with hers. He tasted like…nothing she could put a name to. Full-bodied, like the thirty-five-year-old port her father favored after dinner; sweet and refreshing like Grandma’s orange sorbet, her favorite dessert; savory and woodsy like air in a forest after a quick, unexpected downpour.

A fleeting thought that maybe, just maybe, Nikko didn’t dislike her as much as she’d believed flew through her mind.

His fingers drifted along the column of her throat, across her shoulders, down her back, to settle, through her robe, on her butt. Molding his hands to her rounded flesh, he pulled her in closer, folding her into him and letting her know just how much what he was feeling wasn’t dislike.

While his tongue mated with hers, his hands slipped under the hem of the short garment to cup the bare skin he found there.

As she’d massaged the muscles and sinew over his leg the night before, he returned the favor, squeezing and kneading her butt in his warm, firm grasp. For a heartbeat, Stacy tensed, her gluteal muscles instinctively tightening. The touch of a man’s hands so intimately pressed against her flesh wasn’t something she was used to.

In the next instant, spurred on by the gentle, thorough pressure of his fingers, she relaxed and pushed in even closer, nothing separating their bodies but their clothes.

Nikko slipped one finger under the strip of her thong, tugged it to the side, and with another traced a line down along the cleft between her cheeks. Her knees buckled when he thrust a knee between her thighs, forcing them to open for him, pressing intimately against her. She could feel the soft denim of his jeans through the tiny wisp of the thong’s lace panel and when he began rubbing his knee across her mound, her insides turned to melting gold.

Every nerve fiber in the lower half of her body stood straight up at attention. Stacy widened her stance as much as she could. It was then she realized she was standing on the very tips of her toes. Nikko bore most of her weight as she leaned against him.

He shifted again, reached down, and dragged his finger along the heat pouring from her core, now separated and open to his touch.

A guttural moan, deep and filled with longing, escaped in the air as his lips left hers to trail down and nuzzle the sweet spot behind her ear. He tugged the lobe between his lips and bit down, while his wicked and persistent finger dared to dip into the long, wet length of her.

And she was wet.

His strong, steady finger glided from one end of her to the other, slipping across her flesh and through every defense she had.

A quick thought that nothing had ever felt so good, so god-blessed good as Nikko’s hands on her skin, came to her.

She clutched the ends of his hair tighter, her breaths shallow and fast as his fingers dragged along her, their rhythm timed to perfection with the movement of his tongue in her mouth.

The air around her exploded with the echo of a deep, reverberating groan.

Just as she realized she’d been the one to make the sound, the room was shattered by a blare of static from her walkie-talkie.

Nikko jerked his head back, surprise and anger mixing on his face as he heaved his gaze from her face to the device resting on the bed, and then back to her.

A well of boiling heat suffused his half-closed eyes as he gazed down at her. His lips were swollen and kiss-slick-wet, and when his tongue flicked out and ran across his top lip and then the bottom, as if savoring the taste of her, Stacy’s breath caught.

He still had her pinioned against the dresser, one hand caressing the nape of her neck, the other burrowed between her legs.

“Stacy? You there?” Reality washed over her like a tidal wave. “I—I have to get that.” She pushed against his chest, tried to slide from his hold. The man was as solid as a fortress. He stood, stone-still and immobile.

Intrigued? You can order your copy here, along with  the other WIll Cook For Love books,

COOKING WITH KANDY and A SHOT AT LOVE 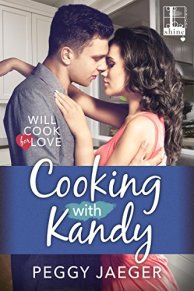 and one thing before you go: I just found out ( yesterday!) that CAN’T STAND THE HEAT is a finalist in the Desert Rose RWA GOLDEN QUILLS Contest for 2019!