I can’t believe I forgot to add this first kiss when I was highlighting all the MacQuire Women books!! THE VOICES OF ANGELS tells the story of MacQuire family eldest daughter, Carly MacQuire Lennox.

Love is the last thing Carly Lennox is looking for when she sets out on her new book tour. The independent, widowed author is content with a life spent writing and in raising her daughter. When newscaster Mike Woodard suggests they work on a television magazine profile based on her book, Carly’s thrilled, but guarded. His obvious desire to turn their relationship into something other than just a working one is more than she bargained for.

Mike Woodard is ambitious, and not only in his chosen profession. He wants Carly, maybe more than he’s ever wanted anything or anyone else. As he tells her, he’s a patient man. But the more they’re together, Mike realizes it isn’t simply desire beating within him. Carly Lennox is the missing piece in his life. Getting her to accept it-and him-may just be the toughest assignment he’s ever taken on.

A sudden gust of spring wind swept Carly’s hair into her face. Mike stopped and brushed it back with his hands. He wound a curly tendril around his finger, marveling at its silky softness, its sheen. “I’ve wanted to do this since I saw you sitting in the window.”

Since she was tall, she almost mimicked his height. But not quite. Locking his gaze with hers, he took her face between his hands and very slowly brought his head down. Her body tightened, her shoulders lifted and froze. Ignoring the response, his lips grazed across hers, tasting, testing, moving hurriedly. When his tongue parted her mouth and leisurely explored the hidden treasures within, she tilted her head back. As he deepened the kiss, taking his time, not rushing, just discovering, she finally relaxed against him.

His mouth continued to move on its lazy course while his hands framed her face, the velvety softness of her skin a delight to touch. Ignoring the hammering sounds of the traffic around them, oblivious to the irritated pedestrians forced to maneuver around them to pass, he concentrated only on her.

With a steadied slowness warring with the quaking fighting within his system, he raised his head. Carly’s eyes were closed, her lips still parted. She took her time opening them, and then stared up at him through drowsy, languid confusion.

“Am I the only one who’s feeling something here?” His voice was a soft murmur over the loud hum of the city surrounding them.

“No,” she whispered. He saw the regret of her hasty reply a second later when she lowered her eyes.

“Mike, I don’t want you to get the wrong idea.”

Carly eased out of his embrace, shoved her hands into her jacket pockets and began walking again. Possessively, Mike snatched her arm back and circled it within his.

“I…” Carly began, then stopped. “Oh, hell. I’m not good with words in situations like this.”

His laugh came quick, charmed by her nerves. “Pretty pathetic declaration for a writer.”

Carly stuck out her bottom lip in a very alluring pout. He was tempted to stop and take her mouth with his again. “Don’t mock me. When it’s on paper I can get it right. Real life has no re-writes, no editing.”

“Granted.” The sunlight played with the alternating auburn and fire-red highlights in her hair as they began to walk again. He was convinced no color had ever been so alive.

Carly squared her shoulders. “I don’t want you to get the wrong impression about me. Concerning men.” When he didn’t comment, she continued. “It’s only, well…I haven’t been involved with anyone since my husband died. I’ve been busy with my daughter and my writing. I haven’t met anyone I’ve been interested in, I guess.”

Carly turned to look at him. Irritation crossed in her narrowed eyes. “You’re pretty sure of yourself.”

Mike laughed again. He stopped and cupped her cheeks. “You’re even more beautiful when you’re angry. Your left eyebrow arches ever so slightly and your eyes turn the most incredible forest green.” He kissed her and felt her pulse trip again under his fingers. “I would bet,” he said into her hair, breathing in the fresh fragrance of the shampoo she’d used, “no man since your husband has made your heart beat this fast, or your breath come in such spurts, as when I do this.” He lowered his head to kiss her again.

When she arched her back, Mike’s hands did a slow slide downward, coming to rest on the dip under her waist.

“Tell me I’m wrong,” he commanded, his voice charged with challenge.

“You’re a liar, Carly Lennox.” Before she could refute him, he continued, “You’re breathing is way too fast, and your eyes are unfocused. But for now I’m willing to back off. I know we’ll be together. I’m certain of it.”

“Why you arrogant, egotistical—I said you were nice. Ha!” She turned on her heel and started to walk away. His vise-like grip on her arm stopped her short. Mike spun her around, drew her to his chest, and his mouth crushed down to hers in a kiss neither patient, nor tender. It bespoke all the raw desire and hunger churning inside him.

Her resolve began to slip under his hands as she relaxed against him again. He knew she didn’t want to respond, but seemed to have no power to pull away, as he had no power to stop the craving for her firing within him. Instead, she moved closer, molding her body to his and winding her arms up and around his neck. Through her light spring jacket he could feel the softness of her body, the desire vibrating through it as her kiss answered his, meeting it measure for measure. Mike pulled her deeper, immersing them in a contest of shared longing.

A blast of sanity blew through his mind when a car horn blared close to them. He clamped down on his rising desire, and eased his hold, releasing her. Carly lowered her head and, once again, avoided his eyes.

Mike’s hand gently cupped her chin and lifted her face back to his. Through eyes narrowed to slits, he said, “Okay, that kiss was a little crude, I’ll admit. As a rule I’m not so-”

“Good word.” He smoothed her windblown hair down with his hand and tucked an errant tendril behind her ear. “For a writer.”

Intrigued? You can get your own ecopy, print copy or Audible version here: The Voices of Angels

And don’t forget, HOPE’S DREAM is one of 20+ Sweet Romances in a new BOOKSWEEP GIVEAWAY.You can enter here: BOOKSWEEPS 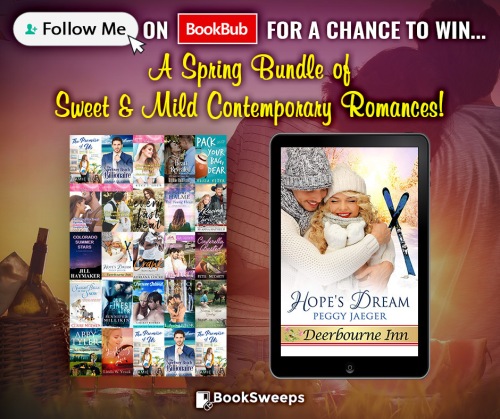