An October interview with a Vampire courtesy of Linda Nightingale.

One of my favorite and prolific Wild Rose Press sistahs, Linda Nightingale, has a new book out just in time for  Halloween and all things vampire and sexy related, titled, SINNER’S OPERA!

She’s brought along her hero today for an interview, so  you’re in luck because you get to read a real live Interview with a Vampire! Hee hee. Sit back and enjoy…..-

When did you become a vampire? I was infected with the virus that mutates human DNA in 1659 in France. Of course, at that time, I only knew I’d been drained near death, fed blood from my vampire mother’s veins, and woke up immortal and craving blood. Within days she was destroyed, and I was orphaned with mind-blowing powers that I didn’t know how to control.

Do you drink blood or are you a psychic vampire? Personally, I believe psychic vampires are more dangerous. I’m a blood drinker. Except for giving pleasure in my vampire kiss, I don’t interfere with people’s lives…well, with one exception, but that’s another story.

What’s the worst thing about being a vampire? Loss of the sunlight. I’d love to see the sun shining on the blue ocean below my ancestral home. Royal Oak perches on a hill above a hamlet on the west coast of Devon. I can see the black ocean from my bedroom window…a tragedy really. The craving for blood runs a close second. It’s like a living thing stinging your veins and is completely irresistible. I can shield against the desire but it takes a lot of effort. Because I love her, Isabeau is my greatest challenge.

Are you a magical creature or are you a different species? I’m a magically different species. (he laughs) The cross has no effect on me, but I am light sensitive. You can see me in mirrors, thank God, because I’d hate to comb my long hair blind. Somehow it managed to tangle, even though I don’t move at all in my daily sleep! When I was a child, sometimes our cook used too much garlic, and I detest its smell, but it has no other effect on me.

Do you enjoy being a vampire? Most times. Of course, being a vampire does present problems, sorrow and regret creeping up on you when you least expect it. Blood lust endangers the ones you love the most.

How do you feel about humans? I’m in love with a mortal woman to the dismay of the Vampyre Council and to my own danger. I judge humans the way I judge vampires or any other species—by their actions. But I do have to admit that beauty is high on my list of priorities. My mortal love, Isabeau, is a beautiful, intelligent geneticist. She is the culmination of centuries of dreams.

What is your life goal for a life spanning centuries? A race of immortals with human morals and gentleness—half-vampire and half-human to bridge the treacherous gulf between the two quite different species.

Do you have a code of honor? I’m a relic from the Restoration era. My code of honor is often influenced by that mortal man who became the vampire Morgan D’Arcy. Now, in the middle seventeenth century, the aristocracy drank to excess, whored, and…I try not to allow this time of my life to rule my actions. The Vampyre Council, Les Elus, has the end say, but I’m a rebel at heart.

What makes you angry? Lucien St. Albans and Les Elus. Both stand in the way of my life purpose. Les Elus forbids the creation of a DarkeChilde, a vampire-human hybrid. As you may have noticed, I’m not overly concerned with the rules.

Name one person you admire. Charles II. I was with his touring band of banished Royalists after his father was beheaded at Whitehall. He suffered great hardship, and yet was restored to the throne of England without an ounce of bloodshed.

Morgan will be appearing in concert at the Royal Albert in London, England on November 11th.

Linda Nightingale’s Obsession series stars Morgan D’Arcy, in all his facets. The books are Sinner’s Opera, Sinner’s Obsession, and Morgan D’Arcy: A Vampyre Rhapsody, a companion book and a walk through the centuries with a piano-playing James Dean!

Tagline: Vampire Morgan D’Arcy has everything except what he most desires…a woman he has loved since the day she was born…Isabeau.

Morgan D’Arcy is an English lord, a classical pianist, and a vampire. He has everything except what he desires most—Isabeau. As the Angel Gabriel he’s steered her life and career choice, preparing her to become Lady D’Arcy. Many forces oppose Morgan’s daring plan—not the least of which is Vampyre law.

Isabeau Gervase is a brilliant geneticist Though she no longer believes in angels, she sees a ticket to a Nobel Prize in Gabriel’s secrets—secrets that have led her to a startling conclusion. Gabriel isn’t human, and she fully intends to identify the species she named the Angel Genome. Morgan is ready to come back into Isabeau’s life, but this time as a man not an angel. Will he outsmart his enemies, protect his beloved and escape death himself? For the first time in eternity, the clock is ticking.

A refugee from Les Miserables peered at me with the strangest, most beautiful eyes—gray with black flecks. Her hair, straight, thick and pale as mine, flowed over thin shoulders past her hips. She took a tentative step closer, and I saw that her legs were horribly twisted, a birth defect. Failure haunted me, and resentment burned in my heart. I could help end such needless suffering. With my DNA, Isabeau would save the unborn from this misery. I swallowed hard, tears stinging my eyes. If not for Vampyre law and my own mistakes, tonight Isabeau would be my wife and the mother of my child. Instead, she would go on without me—and I would…I didn’t know what I would do.

“That looks like blood on your coat.” The girl wiped her nose on her hand. “It’s dark. What’re you doing alone in the graveyard? Did somebody you love die?”

My throat closed, my heart cramping. “Not exactly.”

“You’re either dead or you’re not.” The ghost-like urchin, shivering in a thin, torn jacket, was a mere ten years old.

“That’s not exactly true either.” I kicked an acorn with my toe.

She inched closer, her eyes wary. “You talk funny. Where you from? Like music, kind of going up and down.”

“What are you doing here alone at night? Aren’t you afraid of ghosts?”

Her face was young but too wise. “Momma says the dead can’t hurt you. It’s the living you got to worry about.”

“Your mother is a wise woman.” I studied rain-jeweled trees, the rain-slick path.

The girl shrugged a shoulder. “If she was all that smart, she’d get rid of Tommy.”

I wished I had time to continue this conversation. “That’s why you ran away?”

“Yep. Sick of kids laughing at me. Tired of being hungry. I’m going to ask the sisters to take me in. I can work.” She tilted her face to the misty sky, raindrops sparkling on her lashes and her hair. “I always thought I’d be a great lady someday, you know?”

“A great lady?” My voice sounded as hollow as the stone angel weeping over the tomb.

She flung her arms wide. “I’d marry a prince or a rich duke.”

I tried to smile but failed. “Prince Charming isn’t likely to find you in a nunnery.”

This little girl was my chance to play the angel once more. Last night, I’d withdrawn ten thousand dollars from an account in the Grand Caymans as a safety net for my tightrope act. There was scant chance the authorities had thought to freeze or could even find my holdings and I had plastic by the number. I fished in the chest pocket of my coat. My wallet was still there, bulging with wet thousand dollar bills.

“Are you a bum?” She cocked her head, one eyebrow arched.

“Do I look like a bum?” I’d dreamed of changing the world. How the Mighty fall.

A bitter laugh burned my throat. “Hold on to your dreams. Dreams do come true.” My hand shook, and I almost dropped the wallet engraved with my initials and the St. Averil crest—worthless reminders of a life left behind.

“Come closer. I won’t harm you. I promise.” I folded the sodden currency and shoved it into her hand.

She gasped. “Is this real money?” Her eyes narrowed. “Oh, my, it is. A lot of money.” An accusing gaze captured mine. “Did you rob a bank?”

“The money is mine. Now it’s yours.” Thinking of a special little girl I’d taught to dream, I smiled wistfully. “I must warn you. Princes are in short supply.”

“You are an angel,” she whispered reverently. “Grandma said angels didn’t always look like angels when they appeared to you.”

A sharp pain lanced my heart. “I’m not an angel, child. Run along home before you catch a chill.”

And I used energy I couldn’t afford to expend to disappear and reappear behind a mausoleum ten feet away, still smelling of rotting flesh. Past new headstones, I fled, gliding around the shadowed turn. The path twisted left, the bricks chipped and broken. The old cemetery dated to the birth of the colony—a time I’d well enjoyed. Here, there were no faded silk flowers. The loved ones who’d tended these graves were moldering in other graves. I stopped at a raised tomb, wiped the inscription with my sleeve.

Samuel Rutledge, a soldier of the South.

“Samuel, old man, I shall be honored to accept your hospitality this bleak evening.”

A little about Linda: 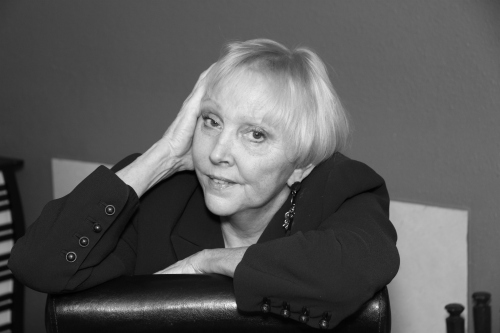 Born in South Carolina, Linda has lived in England, Canada, Miami, Ft. Lauderdale, Atlanta and Houston.  She’s seen a lot of this country from the windshield of a truck pulling a horse trailer, having bred, trained and showed Andalusian horses for many years.

Linda has won several writing awards, including the Georgia Romance Writers Magnolia Award and the SARA Merritt. She is the mother of two wonderful sons, one in England, one in Houston. She retired from M.D. Anderson Cancer Center as a legal assistant. She loves horses, sports cars, piano, theater and the symphony. She enjoys dressing up and hosting formal dinner parties.

You can connect with Linda here:

Peggy here: thank you both sososo much for visiting me today!! SINNER’S OPERA sounds like a hit!

Until Next time ~ Peg

14 responses to “An October interview with a Vampire courtesy of Linda Nightingale.”