I have a special treat today for lovers or romance, medieval times, and historical books. My dear writing friend, Barbara Bettis, has just released a brand new KNIGHTS OF DESTINY novella, titled A WINTER KNIGHT and she graciously gave me a sample to share with all of you! So sit back and enjoy!

A Winter Knight (A Knights of Destiny Novella) 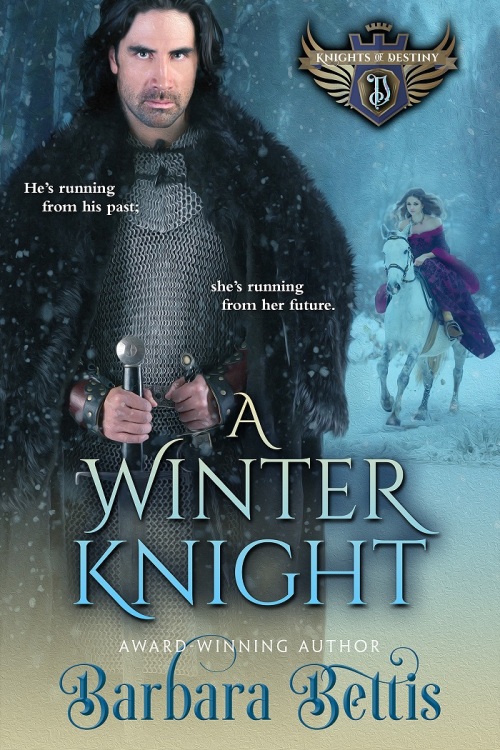 Sir Nicholas has given up on marriage. These days he’s content to captain his friend’s troops and avoid entanglements—until one winter night when he rescues a half-frozen woman from a snowstorm. Her irrepressible spirit and kindness to others reminds him that all ladies aren’t like his former intended, who wed his brother while Nick was on crusade. But he can’t open his heart to Lady Clare. She’s bound to another, and Nick won’t forfeit his honor. Even if she were free, he has nothing to offer but love, and this lady deserves everything.

Lady Clare’s dying grandfather has arranged her betrothal, but the arrival of the man she’s to wed sends her fleeing into a snowstorm. Injured when her horse stumbles, she’s rescued by a mysterious knight. She recovers at his run-down manor, safe at last—until her betrothed tracks her down two days before Christmas. Trapped at home with the wedding imminent, she longs for the winter knight she’s come to love.

Only a miracle can bring Clare and Nick together. But at Christmas, anything is possible.

Get your copy here: AMAZON: https://amzn.to/356xovq

Who was she? And why in Satan’s name was she out here alone? Maybe she’d lost her wits and took flight in a disordered panic. He’d seen women—men too—lose their reason and go wild with grief. Or loneliness. Had she been confined to the same place for weeks on end, with no voice to hear but her own? Had she finally set out alone to find someone—anyone— else alive in the world? His shoulders stiffened. Where in Hades did that thought come from?

He glanced at the soft bundle he held and tightened his arms. Answers would have to wait until she woke. Giving Solomon a touch of heel to pick up the gait, Nick followed his earlier tracks and made it back to the manor quickly.

“Send for the healer,” he called to the guard as he rode through the gate.

Of course not. Someone sure as Hades was needed to care for this unwanted guest.

Tom waited at the stable door.

“Take care of Solomon, then come to the hall. I have an errand for you.” Surely a woman lived somewhere close and could help out on the morrow. Provided the lady lived so long.

Sound came to Clare first. Why was there such noise? Her eyes ached behind closed lids, and her head pounded like a kitchen mallet on boar’s meat. She was so cold. Except, her fingers burned—and tingled, as if a score of needles stuck there. Her toes—she didn’t feel them. Where were her toes?

The noises increased and she tried to turn her head to escape the din, but she couldn’t seem to move. Where was she? The loud clatter settled into voices. Deep voices. Men. Panic clogged her throat. Sweet Mother Mary, he’d found her and brought her home.

A little about Barbara:

Award-winning author Barbara Bettis has always loved history and English. As a college freshman, she considered becoming an archeologist until she realized there likely would be bugs and snakes involved. And math. Through careers as a newspaper reporter and editor, then a college journalism and English professor, she’s retained her fascination with history. Give her a research book and a pot of tea, and she’s happy for hours. But what really makes her smile is working on a new story. Now retired, she lives in Missouri where she edits for others and spins her own tales of heroines to die for—and heroes to live for.

4 responses to “A brand new release from #author Barbara Bettis…”