Today, my Wild Rose Press sistah, Jana Richards, has a new book releasing, TO HEAL A HEART ( The Masonville Series, book 2) and she dropped by recently to give me a little glimpse at the story. I think you’re gonna love it! 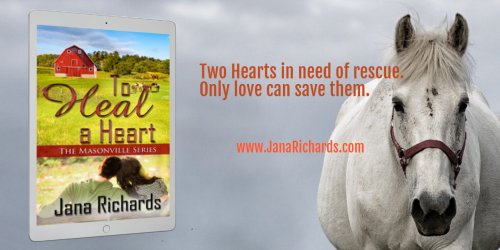 Two souls in pain, two hearts in need of rescue.

Garrett Saunders’ world changed two years ago on a road in Afghanistan. Back home, he feels like a stranger. As he struggles to find his place in the world, he meets a horse destined for the slaughterhouse and a woman bent on rescuing the strays of the world, including him.

Blair Greyson moves to Masonville to look after her ailing grandfather and give her rescue horses a home. Right away she butts heads with a surly former Marine. Despite a rocky start, they come to an agreement: Blair will board Garrett’s rescue horse and he’ll help with repairs around her farm.

Garrett finds purpose working with Blair—and falls in love with her. But she’s hiding a secret. Can she forgive herself and accept Garrett’s love, or will she let guilt and regret continue to rule her life?

“Do you remember the last summer I saw you, just before I joined the Marines? Your brothers were both working for the summer, so you came out to your grandparents’ farm on your own.”

Blair’s face grew hot at the memory. She pulled his shirt from his jeans and laid her palm against the warm, hard muscles of his abdomen. “You mean the summer I threw myself at you and you totally rejected me? No, I barely remember that at all.”

He chuckled as he pushed her shirt off her shoulders. “I was sorely tempted that summer. There you were, prancing around in your short shorts and bikini top, working in your grandmother’s garden while I mowed the lawns. You must have known you were driving me crazy.”

Actually, she hadn’t known. He’d done a great job of ignoring her and making her believe she was nothing but a nuisance. She looked up at him, tilting her head to one side. “If you were so tempted, why did you tell me to take a hike when I tried to seduce you?”

“You were fifteen, Blair. Three years younger than me and just a kid. If you’d known what I wanted to do with you…” His unfinished sentence shimmered between them.

He was such an honorable man. He hadn’t wanted to take advantage of a young girl with a case of raging hormones and too little sense. A girl who believed her only worth was in what her body could give to a boy.

“Perhaps you can show me now.” Blair slowly lowered the zipper of his pants. “I’m not a kid anymore.”

YOU can get your copy here:

A little about Jana…

When Jana Richards read her first romance novel, she immediately knew two things: she had to commit the stories running through her head to paper, and they had to end with a happily ever after. She also knew she’d found what she was meant to do. Since then she’s never met a romance genre she didn’t like. She writes contemporary romance, romantic suspense, and historical romance set in World War Two, in lengths ranging from short story to full length novel. Just for fun, she throws in generous helpings of humor, and the occasional dash of the paranormal. Her paranormal romantic suspense “Seeing Things” was a 2008 EPPIE finalist.

In her life away from writing, Jana is an accountant/admin assistant, a mother to two grown daughters, and a wife to her husband Warren. She enjoys golf, yoga, movies, concerts, travel and reading, not necessarily in that order. She and her husband live in Winnipeg, Canada. She loves to hear from readers and can be reached through her website at www.janarichards.com

You can visit Jana here: