How a children’s book forever changed my way of thinking…

What a great topic prompt today!! This blog piece is writing itself because my answer is so easy – and is one I’ve covered a bunch of times on my website.

Without a doubt, THE book that has influenced my life more than any other is THE LITTLE ENGINE THAT COULD.

First published in 1930, in 2007, the National Education Association named the book one of its “Teachers’ Top 100 Books for Children”.

In the tale, a long train must be pulled over a high mountain. When other, larger engines are asked to pull the train, they refuse. One small engine agrees to try. Repeating to itself over and over, “I think I can,” the little train succeeds in pulling the bigger one over the mountain to its destination. The book ends with the little engine declaring, “I knew I could!”

I’ve said this several times over the years, but this book is, for me, the best version of self-motivation I’ve ever read.

The engine tried to do a task he’d never done before, or even considered doing. He set his mind to it, thinking he could accomplish his task,  he told himself he could – believing it and putting his desire into words, then action – and then did.

What an amazing message for children – and adults, too!

When I started out on my journey to book publication, the first thing I told myself was “I can do this- I can write a book. I’ve got the story in me and I just need to get it on the page.” Telling myself that and believing it, I wrote my first book Skater’s Waltz in a little less than 3 months, mostly between the hours of midnight and 3 am because, well, menopause insomnia! 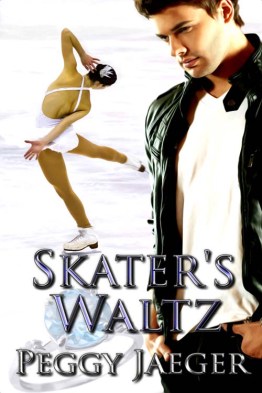 Once I finished the book I then told myself, “you need to get this published.” I not only thought it, I put action behind the desire, entering contests and seeking out agents. Contest won, a publishing deal came next. All because I told myself I could do it and believed I could. Me. A 55 year old, bottle blond, chubby, menopause induced insomniac.

Many times during those first few months when the book was released I thought back to The Little Engine that Could, the book’s underlying message, and how true it was then and is today: If you believe you CAN, you WILL.

I tell myself that every single day. Every. Single. Day. It’s my one undeniable truth.

If you’ve never read THE LITTLE ENGINE THAT COULD, do yourself, your children and your grandchildren a favor, and do so. The message may be simplistic, but I’ve often found that the best lessons to learn in life are the simplest ones.

And since this is an author blog hop, hop on over to these other writes and see which books influenced them in life. I’m sure you’ll find one that resonates with you, as well.