#Author Jeny Heckman and her new release THE WARRIOR’S PROGENY

Hey kids – you know, sometimes you meet a person who just touches your soul in ways you can’t describe. They walk into your life one day and you just know you’re going to connect on a some level. That’s the way I felt when I met, in person, my Wild Rose Press sistah Jeny Heckman last year in NYC at the RWA conference. She is a ray of light, so sweet, funny, and smart. Just check out her bio picture, below. It depicts her personality to the max!! Plus, she’s a talented writer and I am thrilled she’s here today to tell you about her newest release. THE WARRIOR’S PROGENY.

And it drops, today! To say I’m thrilled she’d spending release day with me is true!

I’m gonna let her tell you all about it, but I]ll just say…you’ll want to read this book!

Hello all, thank you so much for joining me today and to the ever delightful Ms. Peggy Jaeger, goddess among all women, thank you for hosting me on your blog!

I’m thrilled to be here. Today is the release of my new fantasy romance novel, The Warrior’s Progeny. Warrior’s is the second book in my Heaven & Earth series and picks up about six months after, The Sea Archer, ends.

The basic gist of the Heaven & Earth series:

It’s been some time after Titanomachy, the ten-year battle between the Greek Titans and Olympian gods. The Olympians have reigned supreme and incarcerated those that challenged them. The greatest of these is Cronus, ruler of the Titans. He is also the father and Grandfather to most of the victors. Humiliated and defeated, Cronus swears retribution and manipulates several key people into creating a prophecy to doom his son, Zeus, and all those that vanquished him. Thus, restoring him to power, he will destroy his enemies and release the last deadly plagues upon the mortal, modern-day world.

However, Themis, the Oracle of Delphi, attempts to establish a caveat before the prophecy is completed. From her efforts, the modern-day descendants of each of the Olympians can fight Cronus and defeat him by joining the quest. The only problem… most modern-day individuals don’t believe in mythology or mythical Greek gods, so how could they possibly be the descendants of them?

In the first book, The Sea Archer, the foundation was set, and the prophecy began its countdown. Everything was new and confusing. In, The Warrior’s Progeny, Cronus and Zeus begin to understand their powers and how they can affect our world and the characters begin to understand what’s happening and why.

Writing this series has been so much fun… challenging but very fun! Wanting to stay as true as I can to Greek mythology and all its devout followers, I also want to put my own spin on the tales and behind-the-scenes no one ever talks about. The Greek gods are fallible, and the human condition is a puzzle.

People have asked me about my characters and how I get them to be so life-like. I’ve read a lot of romance novels, and one my biggest pet-peeves is heaving breasts and throbbing members that speak in a stereotypical manner, defying all reality. People speak in pauses -they interrupt each other- they trip over things and sometimes sex and romance is very awkward and uncomfortable. So, I like to write that.

My characters are chosen carefully and there are many subtle inferences to the gods in the names, demeanor and occupations. For instance, in Warrior’s the heroine’s name is Lilly. Lilies are the sacred flower of the Greek goddess, Hera, the heroine’s ancestor. Hera is the goddess of marriage, and Lilly’s story had to focus on marriage as one of the obstacles both mortal and goddess must overcome in their quest, if they are to forestall the prophecy.

Insider note on my characters: My grandfather’s name was Bert Raymond Bailey. Before, The Sea Archer, was published my grandpa said he wanted his name in the book. I promised him a variation of his name would appear in every book I’d write. So, be on the lookout for Ray, in this book.

I’d like to thank you so much for taking the time out to join me on Peggy’s blog today. I do a lot of giveaways and promotions, not to mention give some behind-the-scene details, so sign up for my newsletter to stay apprised of all things Heaven & Earth.

Have a very blessed day! 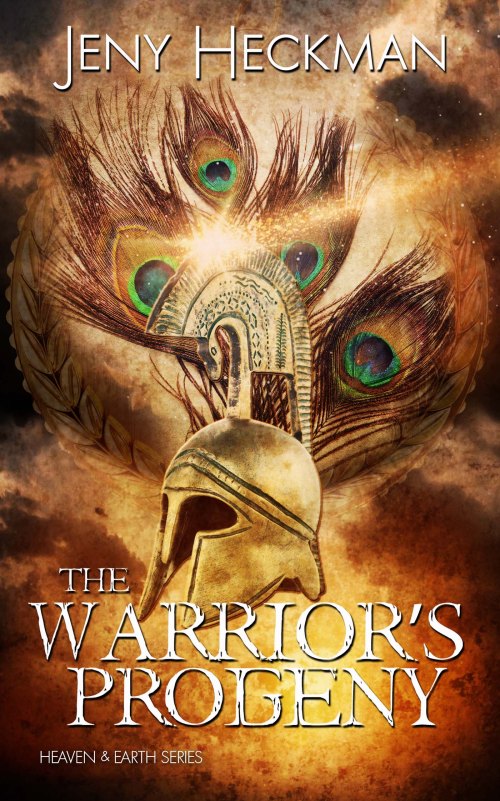 If love dies, can it be reborn…only stronger?

Colton Stone is a newly traded tight end whose reputation is as battered as his football helmet. When he receives a vacation invitation from his new teammates, he accepts. There he collides with Dr. Lillian Morgan, a pediatric cardiovascular surgeon, and doesn’t know what to think.

A widow with two children, Lilly is looking forward to her friends’ wedding. When she meets Colton Stone, his arrogant attitude only makes her long for the love she took for granted. Lilly struggles between letting go of her perfect past for an uncertain future.

Strange events occur, out of the realm of normal consciousness. When black energy touches their world Colt and Lilly become the pawns of the immortal Greek gods. Is the love developing between them natural, or part of a larger prophecy?

Colt’s body temperature heated until his helmet, now that of a Trojan, melted and became part of his skull. Painful, thick, fire plumes ignited from the sides of his head and curved toward the sky, until they solidified in a solid line down the middle of the helmet. Black snake-like smoke wafted up from the earth and encircled his ankles and wrists, locking him into place.

The smoke turned into bindings and massaged tentacles over his chest and phallus.

He looked over at Lilly, who now knelt helpless as her skin became dusky, then turned a brilliant shade of blue. However, the color became an iridescent hue that reminded him of something just outside the confines of his mind. Her skin bubbled, separated, and formed into thousands of compact hairs. Small points protruded from her shoulders and down her arms until they freed themselves from the surface of her skin, as she screamed. Several long, hollow shoots grew, lengthening into the elegant, arching rods, as more buds sprouted from them and turned into thready feathers. As the feathers lengthened, green and blue eyes opened in intervals. At a screech of transformation, Lilly turned into a peacock, whose tail plumed out in a perfect fan. A feathered diadem lifted from her skull and the beautiful eyes all blinked at him. He wanted to mate with her, devour her, possess her, and bellowed out an unearthly warrior battle cry. Breaking his bonds, he charged at her.

Get your copy here;

A little about Jeny Heckman

Award-winning author, Jeny Heckman, was born in Bellingham, Washington, and was the youngest of two daughters. She met her husband, Jeff, in August 1992, and eloped three months later, at Magen’s Bay, on St. Thomas, U.S.V.I.

She wrote her first book, the Catch, in a few short months but took several years before she gained the courage to self-publish it at her son’s urging, and her love for writing began.

In 2018, Jeny knew her next project would be a series that showed adults could have adventures in the paranormal-fantasy genre too. So, she created the Heaven & Earth series, a story of doomed Greek gods and their only salvation, their modern-day descendants. Her first book of the series, the Sea Archer, was immediately picked up by the New York publishing house, the Wild Rose Press, and won, “Best in Category” from the 2018 Chanticleer International Book Awards.

In the year 2020, Jeny released, Dancing Through Tears, a short story from the anthology, Australia Burns: Volume Two, highlighting the Route 91 massacre from the perspective of one family at the concert, and at Mandalay Bay. She also intends to release, the Warrior’s Progeny, and Dee’s Cornucopia, in 2020, continuing the Heaven & Earth Series.

Jeny lives in Washington State with her husband of over twenty-eight years.