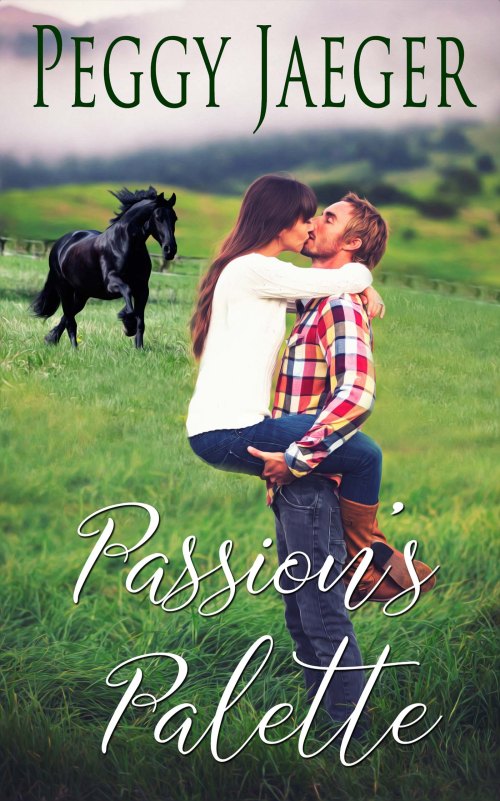 Book 5 in the MacQuire Women series is PASSION’s PALETTE, the story of Serena MacQuire and Seamus Cleary. These are two fiery personalities and it’s not unusual they fall hard and fast for one another.  In this snippet, their mutual attraction isn’t exactly what Serena is looking for.

Seamus’s pulse galloped the moment her arms went around him. Her smooth skin against his was too much. Before he could stop himself, his hand came up to her shoulder, and encircling her neck with his palm, he pulled her closer. Their lips were a whisper away from one another. When her tongue nervously flicked across her bottom lip, an explosion ripped through his core.

Was she really as sweet tasting as he remembered? He needed to know, needed the silky smoothness of her lips pressed to his again to be sure.

With a swift, firm tug on her neck, he pulled her closer and claimed her mouth.

And she was as wonderful as he remembered. She hadn’t stiffened or pulled away as he’d thought she would. Instead, she leaned into him, a willing participant showing him her own desire.

He needed no further encouragement. A gentle yank at the waistband of her pants, and she was down on his lap. Her hands settled on his shoulders, touching so softly he barely felt them.

Taking her lower lip between his teeth in the lightest of nips, he then ran his tongue gently along the seam of her mouth. When she opened, allowing him entry, he explored and tasted every nook and cranny of her mouth. The notion he could sit here consuming her all day and that it would never be enough to satisfy his growling hunger for her swam through him.

Serena broke from the kiss and tried to pull back, but the firm grip of his hands on her waist pinioned her in place.

“It must be the champagne. I’m not usually so…forward.” She shook her head as if clearing it.

Seamus studied her in silence, knowing the way she’d reacted to the kiss had nothing to do with the wine.

“Well, I’m glad this happened. I’ve been trying for hours to figure a way to kiss you again without making you mad at me. I wish you’d have asked me about this modeling business when you first arrived. If I’d known it was going to bring out this kind of response, I’d have volunteered myself before being asked.”

Her head shot up at his words. Why was the irritation drenching her eyes as intoxicating as her taste had been? “It’s no secret I’m attracted to you, Serena,” he said before she could rail at him. “I have been since that first morning in the barn. Correct me if I’m wrong, but I think you feel the same.”

“You certainly make your presence known,” she told him after a few beats. “I don’t usually kiss a man within the first five minutes of meeting him.”

“Good. I’ll take that as a yes.” He dropped a light kiss in the hollow behind her ear. “Where do we go from here with this?”

“Here’s a start.” He pulled back and regarded her. “Why don’t you call me Jim like everyone else does?”

Serena’s gaze flitted across his lips and landed at the scar. “No, I don’t think I can do that. Your name is too unusual. Too…I don’t know,” she said with a delicate shrug. “Too you. I like your name. It fits you. Like this house does.”

Charmed, he said, “Okay. Forget the name. How about having dinner with me tomorrow? I promise this time I’ll go grocery shopping.”

“You just want me to cook for you again.” She broke into a wide grin.

After a second, the humor dancing in her eyes faded. She bit down on the corner of her bottom lip. “Seamus, maybe this isn’t a good idea. I mean, I’ve been so busy lately with everything in my life, I don’t know if I really want to add a…relationship…to it now. I don’t think I could do it justice.”

His hand came up and tenderly smoothed the burgeoning furrow between her eyes. “I’m not asking you to free the known world, Serena. Just out to dinner. The answer is simple. Yes or no. No heavy thought involved.”

“A real restaurant?” she asked after a few moments.

“Whatever kind of food I want?”

He squinted down at her. “Why does that question terrify me?”

Intrigued? Here’s where you can order the book to read more:

and you can find all the MacQuire women books, 1-5 at the same on-line retail sites.