It’s always a great day in my house when an author whom I love, adore, and respect, drops a new book. Today, that author is the lovely Claire Marti.

I know Clair as a Wild Rose Press sistah, but she’s branched out to the indie market and her first book in a brand new independent series has hit the book reading world. Take a gander below

NOBODY ELSE BUT YOU, PACIFIC VISTA RANCH BOOK 1

A smoking hot stuntman. A fiery horse breeder. And a 220-acre ranch too small for both of them.

When an arrogant Hollywood stuntman struts into Samantha McNeill’s breeding barn, sparks fly. She doesn’t care how mouthwateringly gorgeous he is, not when he assumes Pacific Vista Ranch’s resident horse breeding manager must be a man. Not to mention his job threatens to pull her family back into the paparazzi filled world they escaped from over a decade ago.

Now it’s at her door––wearing faded jeans and a wicked grin.

Holt Ericsson can tell the beautiful redhead hates him on sight and the feeling is becoming mutual. But he will call in a favor and convince Sam’s legendary director father that Pacific Vista Ranch is the only suitable place left in California to film an epic Western. Holt’s invested all his savings in the movie and his entire career is riding on it. No way will he allow one irritating, sexy woman to stand in his way.

Sam intends to fight him at every turn…if only her heart didn’t race when they’re together. Holt does his best to steer clear of her…except all he wants to do is hold her close. The sizzling attraction between them is either going to burn up the sheets or burn down the ranch…

Swallowing a flutter of nerves in her throat, she rapped on the door. She was simply going for business. Ranch business. Bringing him dinner was simply being polite, like her father had raised her to be. So why was her heart hammering against her ribcage?

“It’s unlocked.” A muffled voice called. So much for manners. Holt apparently didn’t seem to bother with them.

She hesitated a moment. She smoothed back an errant strand into the ballet bun she hadn’t bothered to unravel. Although she’d changed out of her dance gear into her favorite old pair of jeans and a super-soft t-shirt, she hadn’t been in the mood to mess with her hair. Briefly, she regretted not being more like her twin sister, talented with makeup and hair. But, nope, Dylan had received the lion’s share of feminine genes.

Whatever. She opened the door, and then froze. He was rubbing his hair dry with a white towel slung over one shoulder. The pristine white material emphasized his bronzed skin. Tiny beads of moisture clung to chiseled pecs and the light sprinkling of golden hair on his chest was the only thing preventing him from looking like a marble statue. Barely. Shredded eight-pack abs and sharp V-cuts of muscle converged at the waistband of a pair of jeans as faded as her own. Her mouth suddenly parched, she swallowed. Hard.

“Sorry, I got stuck on the phone.” He grinned and tossed the towel onto a nearby chair.

She jerked her gaze up to his face, which had to be safer, right? Her pulse thrummed in her temple and heat descended to her belly. Damn. His face was definitely not safer than his gorgeous body.

“How’d you get that scar?” She blurted out the words, desperate to distract herself from his pure physical presence. He really needed to put on a shirt. Pronto.

“Scar? Which one?” He laughed, seemingly oblivious to her reaction, thank goodness.

“Forehead. The one across your forehead.” A flaw. Weren’t scars flaws? Why did it make him look just a little dangerous? And it did save him from utter perfection. Didn’t it?

A little about Clair 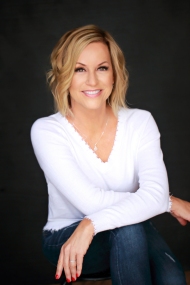 Claire Marti started writing stories as soon as she was old enough to pick up pencil and paper. After graduating from the University of Virginia with a BA in English Literature, Claire was sidetracked by other careers, including practicing law, selling software for legal publishers, and managing a non-profit animal rescue for a Hollywood actress.

Finally, Claire followed her heart and now focuses on two of her true passions: writing romance and teaching yoga.

Claire’s exciting new Pacific Vista Ranch series set on a horse-breeding ranch in exclusive Rancho Santa Fe, California, launches in September 2019.
​
When Claire’s not writing, she’s teaching yoga. You can find her teaching at studios in sunny San Diego or enjoy fifty online classes on the international website www.yogadownload.com. A breast cancer survivor, Claire is a sought-after speaker on the power of yoga and meditation. She’s been published in numerous magazines with articles on wellness and is the author of a memoir, ​Come Ride with Me Along the Big C, on her experience beating breast cancer.

5 responses to “A new #bookrelease from #author Claire Marti”