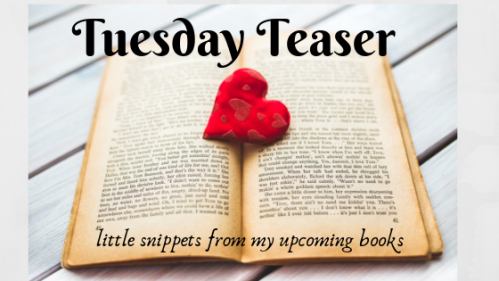 Since BAKED WITH LOVE is due out in less then 3 week ( I’m not freaking out.I’m not!) I figured a teaser from the book would be good for today. This scene is Maureen’s first indication Lucas may feel something for her more than friendship…

“What were the three of you talking about?” I asked Lucas once the others left the kitchen.

Before answering me, he closed the dishwasher and wiped his hands on a dishtowel.

He leaned back across the sink ledge and crossed his arms over his chest. The material on his dress shirt pulled against the bulk of his biceps, and my mouth went dry as unprocessed baking flour.

“What? Heaven’s not exactly the place where three guys can run amuck as a last hurrah to bachelorhood. Not that you’d ever run amuck, but still.”

His right eyebrow rose on his forehead. “Run amuck?”

I shrugged. “You know what I mean.”

When he dropped his chin to his chest, I got the distinct impression he was laughing at me and didn’t want me to see. When he shook his head, I was certain of it.

“I should pay you to help Robert with his SAT prep. Amuck. Good word.”

“And accurate. So, what are your plans? Getting out of town for the night? Driving into Concord or Manchester? Hitting a few bars and drinking your weight in beer?”

He angled his head to one side as he regarded me through half-closed eyes. His entire stance as he leaned against the sink, arms folded, ankles crossed and pushed out in front of him, radiated a calm, cool, and disinterested façade. I knew he was anything but. Lucas Alexander was never so focused, so intense, or so stealthy as when he appeared exactly the opposite.

His ability to remain calm and unreadable was another facet of his personality I loved.

“Why do you want to know?” he asked me. “What are you worried about?”

“You say one thing, but your body language says another.”

I rolled my eyes. “My body language says nothing. There’s no reason for me to be worried about anything since Slade and Mac are going to be with you, Lucas. Whatever you wind up doing, I know they’ll be safe. I’m asking because, like my sisters are fond of saying, I inherited Nanny’s nosy gene.”

His brows pulled together between his eyes and that head tilt shifted.

“What do you mean you’re not worried because they’ll be with me? And what did that crack about me never running amuck mean? Jesus.” He unfurled his arms and swiped his hands through his hair at the temples. “I’ve said amuck more times than I’ve ever said it in my life.”

“That’s a dumb question, since you’re the chief of police.” I held my hands up at my sides. “You’re the most responsible and trustworthy human being I know. You don’t do anything that crosses a line either morally, ethically, or legally. I’ve seen you drunk once in your life after Danny’s funeral, and you deserved to be since you’d just lost your best friend. You’re dependable, Lucas. Completely.”

It was a wonder he didn’t get a headache from the way the skin over his forehead puckered inward.

“Dependable and trustworthy? You make me sound like a cub scout, or an unemotional robot with a stick up his ass. Dull and boring. Like I don’t know how to have a good time and never do.”

“I’m sure you do, but I’m also sure since you became chief, you’re more aware than ever of the small minds and big mouths living in this town. You can’t be seen doing anything”—I shook my head again— “questionable or unseemly, like getting drunk in public at a bachelor party. You need to be on the safe side of gossip at all times. And you are. It’s what makes you such a good leader.”

“Unseemly? Lord, Maureen. Now you’re making me sound like a modern version of Josiah Heaven. You gonna accuse me of having a God complex next?”

How the heck had this conversation veered into him thinking I was comparing him to our town founder?

“What?” I fisted my hands on my hips, well and truly confused and getting irritated by the second. “Weren’t you the one who told my sister in that very breezeway”—I pointed behind me—“not more than two hours ago you weren’t going to condone anything illegal because, quote, you’re the chief of police, unquote? I don’t think I imagined it, Lucas.”

It was as if he hadn’t heard me.

“I’m not old and tired and worn out yet, you know.” He started pacing back and forth, his hands slung in his trouser pockets.

“I’ve got responsibilities to this town and its citizens, Maureen. I’m on call twenty-four hours a day for the city. Never a day to myself, never a night to call my own. Christ. I had to promise Pete Bergeron three weekends in a row off in order to be free Saturday night.”

“I haven’t had a vacation in six years. In addition, I take care of a man who wants nothing more than to die and finds it amusing to take pot shots at my son.”

For the first time in my memory, Lucas’s voice rose. He was always the proverbial calm during a crisis, the one everyone gravitated to for guidance, the man people regarded as a natural leader.

It dawned on me he wasn’t simply tired, but exhausted. And not only physically. The weight of all the responsibilities he carried on those strong, broad shoulders was taking its toll, and he had no one in his life to help shoulder them.

Placing myself straight in front of him, I barred his pacing. I reached out, wrapped a hand around his forearm, and pressed, forcing him to pay attention to me.

He blinked hard a few times, as if coming awake after a deep sleep. The confusion in his eyes worried me.

He focused in on me, then to where I held his arm. When he lifted his gaze back to me, his forehead was furrowed. “Maureen?”

I squeezed his arm again. “Are you okay?”  He tilted his head to one side while he continued to stare at me for a few beats. “I’m worried about you,” I told him.

“Yes. You’re being”—I shrugged then shook my head—“weird. And you’re scaring me.”

He blinked a few times. “You’re worried about me?”

“Yes, dammit.” I stamped my foot, frustrated and getting mad, now. “I care about you, and I’m worried because you’re acting so out of character. What about that is so hard to comprehend?”

I removed my hand from his arm, only to have him grab it back with his own.

“Let go of m—” I stopped dead. One look at the expression on his face and any and all words were forgotten. The confusion reeling in his eyes shifted, cleared, then flew completely to be replaced by a piercing, all consuming…hunger.

Intrigued? I hope so. You can preorder your ecopy here, now: BWL

And if you’d like a PRINT version before the book is released, I’m selling them on my website store for a drastically reduced price, here: STORE 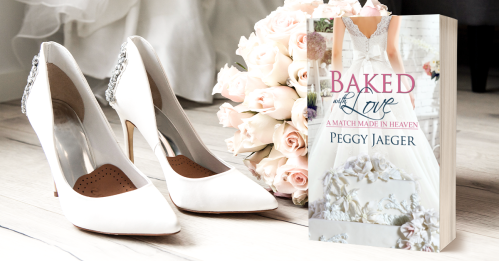 And not to brag ( even though I am) Long and Short Reviews gave BAKED WITH LOVE a BEST BOOK RATING. 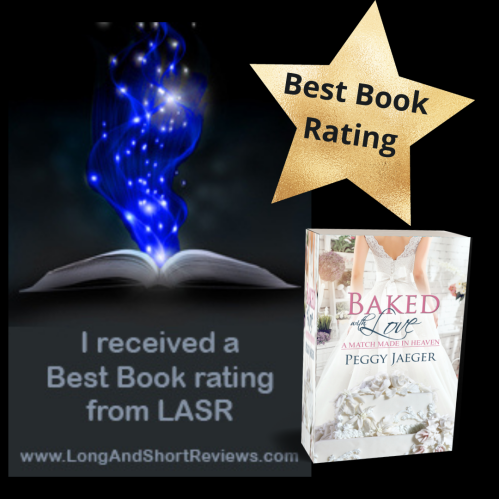 Filed under A Match Made in Heaven