Keeping with our theme of revisiting all my books in series in order, today I give you FIRST IMPRESSIONS (book 3 in the MacQuire Women series). 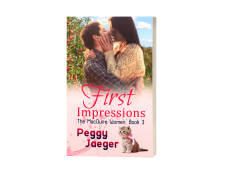 This was the very first book I wrote where I had the hero fully formed and developed before I ever had a plot or a heroine. I just knew I needed to tell Pat Cleary’s story because he’s such a misunderstood guy. People think he’s a player, but he’s really just searching for THE ONE. He wants a marriage as wonderful and long lasting as his parents, so he’s picky and realizes he needs to kiss a lot of frogs first!! hee hee.

Family Practice Doctor Clarissa Rogers’ first impression of Padric Cleary is biased and based on gossip. The handsome, charming veterinarian is considered a serial dater and commitment-phobic by his family and most of the town. Relationship shy, Clarissa refuses to lose her heart to a man who can’t pledge himself to her forever.

Pat Cleary, despite his reputation, is actually looking for “The One.” When he does give his heart away, he wants it to be for life. With his parent’s marriage as his guidebook, he wants a woman who will be his equal and soul mate in every way.

Can Pat convince everyone – including Clarissa – she’s the only woman for him?

“I told you I thought I should apologize but I didn’t want to, and it was the truth. I enjoyed it. I’d hoped you did, too.”

When she didn’t answer but continued to stare at him, an expression he couldn’t name on her face, he shook his head and, said, “My ego really takes a beating around you.”

She smiled then and squeezed his hands. “I think your ego is pretty intact, Pat.”

“I really like when you do that,” he said, a heartbeat later.

“What? Talk about your bruised ago?”

He shook his head, charmed by her teasing. “When you laugh. And smile. I really like when you smile. Especially at me.”

Without thought, like he had in his office earlier in the afternoon, he dipped his head down. With her hands still in his, he gently tugged her closer, and watched her eyes widen as he moved in.

He gave her a second to resist, to pull back. He thought she might.

But she didn’t, so he did what he’d been dying to do all day. Hell, since they’d met.

With her caramel-colored gaze boring into his, Pat kissed her.

A brief touch, barely a whisper of contact is all it was, but Pat’s insides imploded when her mouth settled against his. His hands still held hers and when he pulled back to stare at her face, two things happened simultaneously and almost made him lose his mind.

First, Clarissa trailed her tongue over the area he’d kissed, moisture wetting her plump lips. A shot of pure want bulleted through him when her lips glistened in the dim lighting of the doorway. At the same time he felt a tug on his hands and in the next second, Clarissa’s arms were wrapped around his neck, her hot, sweet mouth plastered to his.

He couldn’t think. Wouldn’t have been able to answer a question if asked. All he could do was feel. Stretched up against the length of him, up on her toes, Clarissa molded her body to his while her mouth pressed against his. His hands went around her waist, up her back to push her in even closer, their bodies separated from one another only by the width of their clothes.

Pat’s hands pushed against the butt he’d been fantasizing about minutes before, clutching it. It fit his palms as if it’d been forged for his hold.

He lost the ability to breath when Clarissa traced the tip of her tongue across his bottom lip. In less than a heartbeat, he sucked it into his mouth, twirling it around his own, exploring every part of her mouth. She tasted like sin laced with sugar. A tiny whimper cried up from the back of her throat, and she tightened her grip around his neck.

She fisted his hair, tugging, twirling it around her fingers, massaging his scalp, as his tongue moved from her mouth to slide across her cheek, skim her jaw, taste the back of her ear. He licked his lips, then trailed his wet mouth back and forth against the hollow of her shoulder.

“God, Clarissa, you feel so good.” He nuzzled the sweet spot behind her ear and gently nipped her lobe between his teeth.

He tugged on it, and his heart skipped a beat when she cried his name. With purpose, one of his hands trailed down her side to trace the outline of a breast. He swallowed her gasp as his fingers splayed over her hardened nipple and delicately pinched it through her shirt. Her butt jumped against his hands, and he felt her vibrate—actually vibrate—against him.

“I love when you say my name.” His lips found hers again, and like the first time, his stomach did a frantic little jig.

He felt her back shake and her hands push against his shoulders, trying to separate them. When she succeeded, his mind went blank as a tiny little suction sound, sexy and unbelievably hot, shot from them when they parted. Her eyes were huge and wet, the brown so deep they looked like chocolate tempering, and he melted right into them. The most intimate part of her was pressed against him, shaking with what he thought was need.

She smiled, almost laughing. He didn’t think his ego could take another blow, when a muffled sound hit his ears.

They both looked down at the same time. Her pager was pressed against his substantial erection. The vibration shook straight to his toes, and his penis pulsed against it. He knew she could see what was happening to him, when, suddenly, he realized he had her pinioned against the door.

With an oath, he gently lowered her, and when she had a solid footing, released his grip.

She pulled her pager from her waistband, repositioned her glasses, which had gone askew from her shirtfront, and went to get her phone.

While she answered the page, Pat none-too-gently banged his forehead against the door she’d been plastered against.

What the hell was wrong with him? Christ, he had her bracketed against a door—a door—like some out- of-control, hormone-driven teenager.

And it hadn’t taken anything other than a small, innocent kiss to drive him crazy. He blew out a deep breath and tried to summon up some calm.

With his eyes closed, he pushed off the door and turned around. When he opened them, he wasn’t surprised to see a smile tugging at the corners of her lips.

He shoved his hands into his pants pockets and nodded. He didn’t know what to say, didn’t know how to voice what he thought he should.

Intrigued? you can get your copy across all digital media and in print, here: FIRST IMPRESSIONS