This week’s topic is a fun one for me (The topic: My favorite tropes of the ROMANCE Genre) because I do love my romance tropes.

I have several favorites that I read from other fabulous writers and that I include in my own stories.

When Parker Blanton meets Ben Olsen during her freshman year of college, the connection is immediate—and platonic. Six years later, they’re still best friends, sharing an apartment in Portland’s trendy Northwest District as they happily settle into adult life. But when Parker’s boyfriend dumps her out of the blue, she starts to wonder about Ben’s no-strings-attached approach to dating. The trouble is, even with Ben as her wingman, Parker can’t seem to get the hang of casual sex—until she tries it with him.

The arrangement works perfectly . . . at first. The sex is mind-blowing, and their friendship remains as solid as ever, without any of the usual messy romantic entanglements. But when Parker’s ex decides he wants her back, Ben is shocked by a fierce stab of possessiveness. And when Ben starts seeing a girl from work, Parker finds herself plagued by unfamiliar jealousy. With their friendship on the rocks for the first time, Parker and Ben face an alarming truth: Maybe they can’t go back. And maybe, deep down, they never want to.

Symphony pianist Moira Cleary comes home after four years of touring, exhausted, sick, and spiritually broken. Emotional and psychological abuse at the hands of someone she trusted has left her gaunt, anxious, and at a crossroads both professionally and personally.

Moira’s best friend, veterinarian Quentin Stapleton, wants nothing more than to help Moira get well. Can his natural healing skills make it possible for her to open her heart again? And can he convince her she’s meant to stay home now with the family that loves her – and with him – forever?

Nemesis (n.) 1) An opponent or rival whom a person cannot best or overcome.

Lucy Hutton and Joshua Templeman hate each other. Not dislike. Not begrudgingly tolerate. Hate. And they have no problem displaying their feelings through a series of ritualistic passive aggressive maneuvers as they sit across from each other, executive assistants to co-CEOs of a publishing company. Lucy can’t understand Joshua’s joyless, uptight, meticulous approach to his job. Joshua is clearly baffled by Lucy’s overly bright clothes, quirkiness, and Pollyanna attitude.

Now up for the same promotion, their battle of wills has come to a head and Lucy refuses to back down when their latest game could cost her her dream job…But the tension between Lucy and Joshua has also reached its boiling point, and Lucy is discovering that maybe she doesn’t hate Joshua. And maybe, he doesn’t hate her either. Or maybe this is just another game.

Photographer Gemma Laine is looking for arresting faces on the streets of Manhattan when her camera captures something shocking—a triple murder. In that moment, she becomes a target for the mob—and a top priority for a very determined, breathtakingly handsome, FBI special agent. With deadlines to meet and photo shoots on her calendar, Gemma chafes at the idea of protection, but every moment she spends under his watchful eye is a temptation to lose herself in his muscular arms . . .

With two of his men and one crucial witness dead, Special Agent Kyros Pappandreos can’t afford to be distracted. But Gemma is dazzling—and her connection to Kandy Laine’s high-profile cooking empire makes her an especially easy mark for some very bad people. Keeping her safe is much more pleasure than business, but as the heat between them starts to sizzle, Ky is set to investigate whether they have a shot at love . . .

Not Another Bad Date by Rachel Gibson

What does a gal have to do to get a good date in this town?

Adele Harris can’t even begin to answer that question. She’s had so many lousy dates that she’s sure she’s cursed. Why else would every man she goes out with suddenly act like he’s lost his mind—and his manners? Adele thought life couldn’t get any more confusing . . . until she learns the marriage of her seemingly Miss Perfect sister is on the rocks. So she goes back to their hometown to give her a shoulder to cry on, only to run smack into Zach Zemaitis . . . the one who got away.

Texans love God, family, and football, though not always in that order

Zach, a former pro star, knows all about football. As for the other two, well, he’s doing his best. But when Adele comes charging back into his life—still all lush curves and beautiful, big blue eyes—he wonders if his best is good enough. After all, he did her wrong. Can a woman with her track record ever really believe that he’s serious this time . . . or is he destined to be another bad date? 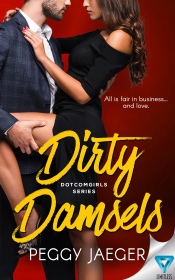 What if Cynderella had a one-night stand with a man named Prince?When I first saw Cynderella all covered in soot in that sexy maid uniform, I knew I wanted to be her Prince.She’s a smart and savvy businesswoman who’s built her cleaning company from the ground up. But now that Dirty Damsels was booming, I’ve been hired to arrange a hostile takeover. But the temptation of having her was too much to ignore… We ended up spending one night together–a night neither of us will forget. Now, I want more. I need more. I want to spend every night, skin-on-skin, with my beautiful Ella. Problem is, when she finds out who I really am, she’ll never forgive me.

Let’s see what some of the other authors in this blog challenge have to say: LASR