So, since my WILL COOK FOR LOVE series is on sale over at KOBO,   I figured today’s snippet should be from one of those books. I love all three of them but my favorite Laine sister is Gemma, so I’ve chosen a little something from A SHOT AT LOVE for today. 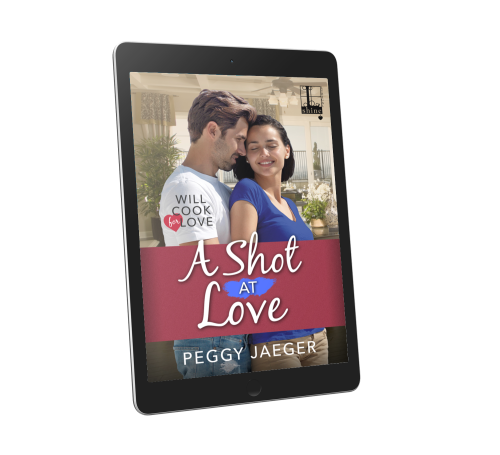 It’s the second book in the series and tells the story of Gemma, a fiercely independent, commitment-phone photographer and Ky Pappandreos, a family-centered FBI agent ordered to protect her when she witnesses a mob assassination.

This is a little scene about awareness, when Gemma sees Ky as something more than a bothersome addition to her usually ordered life.

Dressed in similar sweats to what he’d worn the morning before, his body bathed in gleaming sweat, Ky pummeled one of the suspended bags. His hands were wrapped with white gauze, his arms toned and taunt as he executed each strike with perfect precision and technique.

Gemma stopped on the final riser and watched him batter the bag, fists moving with swift, defined actions, the jabs fast and hard, the recoils even faster.

Shoulders raised, elbows tight, hands balled and up blocking his cheeks and jaw line, he threw a right jab, left, then two rights, all aimed high, and a final forward thrust left, lower on the bag, his knees bending to give him balance.

Gemma wanted to race back to her room, grab her camera and capture the scene before her.

Kyros Pappandreos was the epitome, the very definition of a natural born fighter. Distinctly male, uniquely the warrior, his body moved with the grace of a panther, the stealth of a tiger stalking its prey, and the accuracy of a cobra striking. There was something so sensual, so primal, so animalistic about him, she knew she had to photograph him just this way.

She’d capture him in slow motion first, his tight fist connecting with his target, the sweat of exertion flying from his forehead. Then, she’d move to rapid fire, the image blurring with the speed of his hits. A pugilist, enigmatic, tough, and hard bodied, the bulging muscles and corded sinew in his arms distended with his action, outlined and bathed in the shiny moisture pouring from him.

Ky repeated the moves in the same series of strikes three more times before dropping his hands to his thighs.

He swiped at his forehead with the back of his hand, his breathing hard, but not labored, and turned.

Intrigued? I hope so. If you are the entire series is on sale at Kobo for just $2.99 each. Happy reading, peeps.