Day 4 and here are our stops for the next 24 hours. Please take a moment to stop by, leave us some love and support the bloggers who are featuring us by sharing/liking the post.

We’re heading into the home stretch, peeps! It’s the final week of my Goddess Fish tour. Have you been following along?

Here are this week’s stops:

Make sure you drop by and leave me some love – and a comment. then enter the rafflecopter for a chance to win fun stuff!!!

Until the next tour, peeps. LOL ~ Peg

If you follow this blog you could have seen today’s book snippet from a mile away!!!

I just released MISTLETOE, MOBSTERS, & MOZZARELLA on 10.14, so of course today’s snippet it going to be from that!! Hee hee. Hey! I know what I’m doing…most of the time!

“Tomorrow you go solo,” I said, jumping out of the van. “Now that you’ve met all the regulars and they’re okay with you, I can stay back here and do my job.”

“I told you, Donna, people love to talk to me. And old folks adore me.”

“That’s the truth, if nothing else.” He handed me the van keys. “When we were kids all the old nonne in the neighborhood fawned over you, my own included.” Shaking my head I started to walk back inside but Tony shot out his hand and grabbed my arm.

“What?” The heat from his grip felt like I’d stepped into a natural hot spring on a cold, winter’s day. Instantly, my body warmed inside and out. How the heck could one simple touch do that?

“I wanted to say thanks,” he said, not letting go of me.

“Showing me the ropes.” He took a step closer, still keeping me imprisoned in his grip. “I know you’re super busy with the reopen, but it means a lot you took time to get me up to speed. And I also want you to know how much I appreciate what you and your dad are doing by letting me be here. It can’t be easy on either of you, but you’ve both been nothing but kind and accepting, so thank you.”

Kind to old people, ridiculously good looking, and now a heartfelt and sincere thank you for something my father felt compelled to do. Was it any wonder I lost all brain function around this guy? He ticked off so many boxes on my what-I’d-like-in-a-man list it was scary. That I could picture what it would be like to be with him on a purely personal level and not just because he was on the job, proved scary, too. I’d been head over heels stupid in love with him at seventeen. It had taken a long time to get over the hurt from his dismissal after those glorious minutes in the back of his Z8.

I knew I had to keep some emotional distance from him now because Tony Roma could inflict serious damage to my heart.

My one saving grace was that I wasn’t a seventeen-year-old girl anymore with stars in her eyes and looking for some positive attention from the cutest guy in school. I was an intelligent, grown woman who managed a thriving business and had self-confidence up the hoo-ha. In addition to knowing the man I wanted to give my heart to for forever would want and cherish it.

I had to ensure I didn’t embarrass myself and fall for Tony all over again when I knew the feelings would never be reciprocated. One broken heart in a lifetime was all I was willing to give to any man.

I took a breath, nodded, and said, “Just make sure you find out who killed Chico. Now, I’ve gotta get back to work.”

I tugged on my arm and he let me go.

Was it my imagination he had what looked like reluctance in his eyes when he did?

Intrigued? I hope so! You can get your copy, here:

And don’t forget to follow me on my Goddess Fish tour. Here are this weeks stops, beginning with tomorrow morning:

Today’s blog stop is at fellow Romance Gem sistah Caroline Clemmons ‘ blog. Please stop by and leave me some love!

And have you bought the book yet?? The reviews are staggering me!!! So much love for Donna and Tony!

FINALLY!! Here it is- the book I’ve been talking about non-stop for months! LOL. And what would release day be without a day fraught with issues??!!

Here’s the major one: the file that I uploaded to Kindle was an older version and rife with typos. Unfortunately, that version went out to the people who pre-ordered the book. As soon as Amazon allows me to, I am going to upload the correct file. If you were one of the people who preordered and don’t want to read a book with a bunch of typos in it, please notify me via Facebook  messenger and we can discuss what to do.

OTHER THAN THAT CATASTROPHE…. Remember, I have my FB event going livelivelve at 1:30 pm EST this afternoon. I’ve got 15 authors who will be celebrating with me, so tune in. Here’s the link: FBEvent

And the reviews have been coming in. Check them out here: BB

This is my favorite line of all my reviews, pulled from N.N. Light’s review:

Today, just 1 day before release day, I’ve got a two-fer. Come visit me at The Pen and Muse Book Reviews  and Lisa Everyday Reads 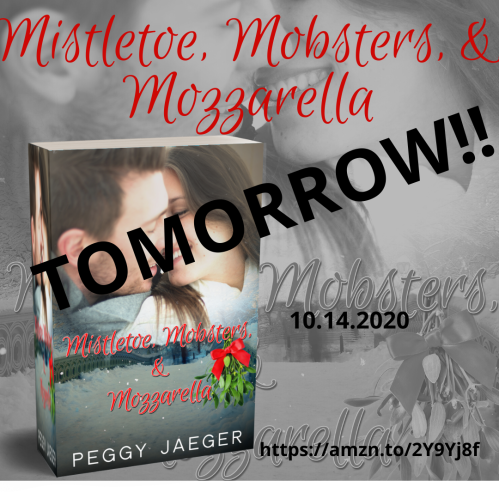 Please stop by and support the blog, me, and don’t forget to enter the rafflecopter!! 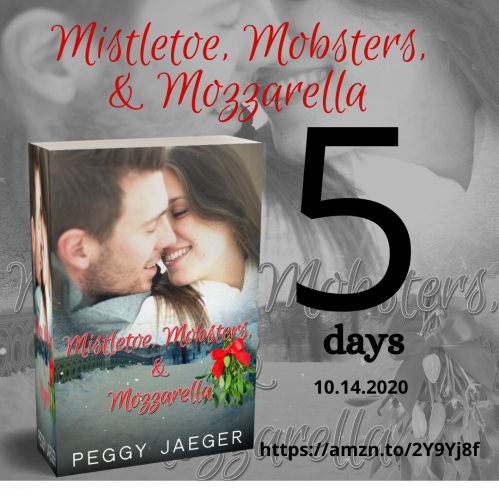 Woo-hoo! I can count on the fingers of 1 hand how many more days until release day!!!

Have you preordered your copy yet? Here, let me make it easy for you: MISTLETOE, MOBSTERS, & MOZZARELLA

Have you followed my Goddess Fish Blitz tour? Here’s today’s stop:All the Ups and Downs

Have you entered my Goodreads giveaway for the chance at one autographed print copy?? Here’s the link: Giveaway

With just 1 week to go before Mistletoe, Mobsters, & Mozzarella releases into the book reading world, I figured I’d give you one last look between the pages to whet your Holiday reading appetites! hee hee. In this scene, Uncle Sonny proves why he’s such an intimidating – yet lovable – character.

Angelo pulled back his shoulders and gave my uncles what I figured was his I mean business cop glare as he walked back out.

“Ange is actin’ too big for his britches these days,” Uncle Joey said once we were alone.

“What’s going on here?” Uncle Sonny asked, adopting his typical intimidating stance: his knee length wool coat drawn to his sides as his hands shot into the back pockets of his trousers, shoulders tight, chin dropped, and rocking back and forth on his feet. I’d witnessed this power posture often while growing up, usually when one of my brothers or cousins needed to be taken in hand and Sonny was the adult in the room in charge of dishing out discipline.

Tony ignored the question, his attention, instead, focusing back on my father.

“I assume you called them?” he asked.

“I did,” I said, wanting my father to be absolved of all blame and therefore not subjected to scrutiny. Tony said he knew I hadn’t killed Chico, but he never said anything about my father not being a suspect, though, only that he was honest. Honest people commit murder the same as crooks do. Given enough incentive, anyone could.

“After I told her to,” my father said, shunting a steely eye my way.

“I don’t hear nobody answerin’ my question,” Sonny said. I had to stifle a giggle at the sixty-something bear of a man sporting a petulant pout like my toddler nephews did when they didn’t get their way.

It was apparent in the way he continued to ignore my uncle Tony wasn’t a man easily intimidated. With his attention still on my father, he asked, “You’re sure Chico never got any visitors here at the store, anyone he had to, say, go take a break with? Something out of the ordinary like that?”

My father shook his head.

“Nothing. Like I said, he was a good worker, never gave us any trouble, and I didn’t know anything personal about him.” Which, considering the current situation, now felt so sad to me.

“Okay. I’m gonna have to ask you to leave the store after you show me that parking lot footage. The crime techs need to sweep the place and we don’t want anyone trampling on any evidence more than already has.”

Uncle Sonny looked as if he was going to say something, but I cut him off before he could. There was something I wanted to give a voice to.

“When can we open the store? I know it sounds a heartless, but we are running a business here and people are depending on us.”

“That’s not gonna happen today. For now, you two need to know the deli has to stay closed at a minimum three days—”

“We can’t afford to stay closed for three days during the holiday rush,” I cried.

“You’re gonna have to. Your store is an active crime scene and can’t be released until I know what’s what. I’m sorry, but that’s it.”

“You don’t sound sorry at all,” I said, then mimicked my uncle’s pout.

“It is what it is, Donna. Now, do you two want me to have an officer escort you home?”

“We’ll take them,” Uncle Joey said. “They should be with family.”

“Come on, little girl,” Daddy took my arm. “Get that footage for Tony, then we got calls to make and we’d better get started.” To Tony he asked, “You’ll keep us in the loop? Let us know when we can reopen?”

And I knew that statement for the lie it was.

He’d made me a promise he’d call me after those seven minutes of heaven in his back seat.

My phone had never rung.

Intrigued? you’ve got a few days left to preorder it!!!! Let me make it easy…here ya go: MMM

And did you know I’ve also got A Goodreads Giveaway for 1 of 3 print and autographed copies going on right now? You can enter here: MMMGoodreadsGiveaway

Only 6 more sleeps until my Holiday RomCom Mistletoe, Mobsters. & Mozzarella releases!! I’m getting really excited. Have you preordered your copy yet?  There’s so much going on with regards to this book:

2. I’m having a Facebook release day party with 15 of my favorite author/friends

3. I’m participating in another facebook party this Sunday, 10.11 for author J.M. Davis

4. Plus, I’ve got a GoddessFish blog/blitz tour currently going on.