A visit with #author Karilyn Bentley, and a little exciting news to share!

When I first started writing I knew I’d meet people/writers on whose shoulders I would stand. Writers who paved the way, took risks, and basically helped me be a better writer in the long run. Today’s guest is one of those people/writers. Wild Rose sistah Karilyn Bentley has visited with me several times before when she’s had one of her newest, fabulous books released. Today’s visit is extra special because she’s got some amazeballs news for us all.

Hi Peggy! Thank you for letting me drop by for a visit!

I’m happy to announce the release of The Shadowheart Curse! This book is special to me for several reasons, the main one being that it will be turned into a movie. You can even live stream the making of the movie! Pretty cool, eh? I was asked to write the book based off an idea the movie director had. He wanted to turn ten books into movies and I was asked to write one of those books. Super exciting! And nerve wracking. I had to write a story with an already decided upon locale, character goals, and basic plotline. The story is set in Italy, a place I’ve never been to, and the whole story takes place at an abandoned mill (totally creepy!). Needless to say, research was needed. Most of my research centered on abandoned mills like the one in the story. It started off as a way to try to see what the inside of an ancient mill looked like (the pictures the director gave me of where the movie will be filmed only showed the outside), but quickly turned into a fascinating side trail. There is a place in Sorrento, Italy called Valley of the Mills where a bunch of mills were abandoned and the land took over. The buildings are creepy, yet cool, to look at with moss and trees covering their stones. Check it out: http://desertedplaces.blogspot.com/2013/12/the-abandoned-mill-in-sorrento-italy.html

You’ll have to watch the movie to see the pictures of the mill in The Shadowheart Curse. <evil laugh!>

The movie comes out 2/14/20 and you can go here (https://deadlyten.com) and sign up to know when the live streaming event occurs.

Read on for the book blurb and excerpt. And don’t forget to go to https://deadlyten.com and sign up to know when the movie is live streamed! 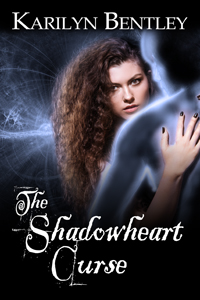 Escaping New York after a client’s untimely death, medium Adrianna Sinclair flees to her family property in Italy. All she wants is to avoid ghosts, but an attractive one tempts her in ways she never knew possible.  Luca Fausto has been trapped on the Romani property for over a century for a crime he didn’t commit.  Adrianna may be the answer to breaking the curse that keeps him bound.  Standing in their way is a demonic spirit’s plan for revenge.  Will they prevail or will Luca be cursed to the shadows forever?

Lights drew her attention to the opposite wing of the mill, where a man stood staring at her window. At her. Breath caught in her lungs as she froze.

But only for a brief moment until she realized it wasn’t a man, at least not a living one. Her breath escaped on a whoosh of relief. Intuition whispered the man was the spirit who’d watched her last night.

The one from her dream.

Shadows clung to his body, ghostly fingers releasing as he stepped into the dim slash of moonlight. Lights flickered from behind him, like the dying gasps of sputtering candles. Dressed in a white shirt with an old-fashioned high collar, sleeves rolled halfway up his forearms, and dark trousers, he reminded her of a working man in a World War I photograph. As if he had removed his coat and tie and rolled up his sleeves to get to work.

Except the men in those photos didn’t sport the wide-eyed, happy look of this man. Ghost. Whatever. Yeah, he wasn’t the only one surprised. She’d sworn never to see a ghost again, yet there stood a ghost, captured by her gaze. The man was hot, in an old-fashioned way. At least he didn’t sport a handle-bar moustache.

He gestured to her, his hand beckoning in a “come here” motion.

She squeezed the bridge of her nose. Was she actually thinking of heading his way? Judging by the way her feet pointed toward the door, she’d already decided. Dammit. She might not want to see a ghost or speak to a spirit, but past experience told her if she ignored them, they ramped up the annoying factor.

How bad could it be to talk to an attractive spirit?

A little about Karilyn :

Karilyn Bentley’s love of reading stories and preference for sitting in front of a computer at home instead of in a cube, drove her to pen her own works, blending fantasy and romance mixed with a touch of funny.

Her paranormal romance novella, Werewolves in London, placed in the Got Wolf contest and started her writing career as an author of sexy heroes and lush fantasy worlds.

Karilyn lives in Colorado with her own hunky hero, two crazy dogs, aka The Kraken and Sir Barks-A-Lot, and a handful of colorful saltwater fish.

Where to find Karilyn:

Peggy here: OMG!!! isn’t that the most exciting news!!! I can’t wait to watch the movie and read the book. Thanks so much for allowing me to share your fabulous news today, Karilyn. Best of luck to you, and as always, thanks for being such a supportive WRP sistah!