Book sales, Amazon rankings, and being dropped by a publisher….yeah; happened to me. Twice.

There are so many days I wish I’d started writing fiction for publication in my 20’s. That would have been the height of the 1980’s where writers lived like kings, publishing houses hired publicists for their talented authors and book tours really involved actually touring to different places and not all over the internet.

I peaked too late, it seems.

In a time where major, traditional book publishers are dwindling as fast as an anorexic’s weight, book sales can mean the difference between a royalty check and getting bounced by your publisher for lackluster – or nonexistent – sales. Here’s my cautionary tale and lament.

You all know I’ve had a long standing publishing relationship with the WILD ROSE PRESS, who I love beyond all else!!! I’ve also had three books published by Kensington/Lyrical and recently, a new series contracted by Limitless Publishing. The series for Lyrical was originally seven books, but they dropped me after the third was published. Why, you ask? I was told at the time is was because the line was moving in a different direction away from romance and more toward cozy mysteries. And yet I still see new authors being promoted monthly with Lyrical romance releases.

After the recent publication of DIRTY DAMSELS, book 1 in the DotComGirls series ( 3 books planned), I submitted the second book in the series, HELPFUL HUNKS, only to be told the company was not going to be publishing any more of my titles due to lackluster sales. When I submitted book 2, book one had been out in the world for a total of 3 weeks.

How many sales were they hoping I’d get in that time frame? I didn’t even have a book promotion planned until august when  I got back from RWA so I could devote time to it. I did a ton of preorder promotion and hoped my opening day sales reflected all that work. I was in London during the release and tracked my ranking the entire time I was there. According to my amazon results, I had the best release week of my life, with the second week even better. And this is my first book in Kindle Unlimited, which you don’t even see included in your ranking.

How can that possibly mean lackluster sales?

I think the major mistake I made was in submitting the second book so soon. I should have waited at least three months to do so. I don’t even get a royalty check until the end of this month, so that’s going to be interesting to see. The publisher was obviously basing contracting book 2 based on book 1 sales, which, at that time, weren’t even in.

I used to wonder why so many authors self published. I’m starting to get it, now.

And…because the promo never ends, don’t forget I’ve got a 99cent sale on  for DEARLY BELOVED until August 23rd. If you haven’t read it yet, do so soon because book 2, TODAY, TOMORROW, ALWAYS releases soon and you’ll want to know what’s going on in the lovely town of HEAVEN, NH before it does!

get your copy here: 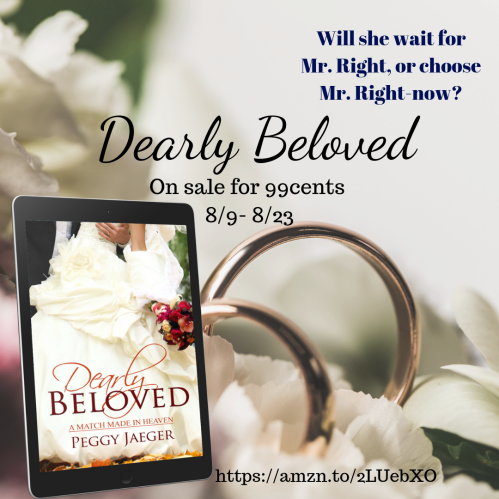