I’ve been radio – or in this case, computer – silent for a few days as I try to get my life back to normal after my week away. Seven whole days to be gone from home is a long, long-ass time. In addition to all the day-to-day stuff I had to catch up on (grocery shopping so we wouldn’t starve, doing piles of laundry so we’ll be clothed and not naked in society, paying bills so our electricity and internet won’t go out) I also had to get my writing back on track.

Deadlines to honor. Editors to appease.  Words to put on the page.

I wrote a little in my WIP while in Atlanta, but I mostly just penned my daily blog and did some LIVE videos on facebook in between workshops and networking and traveling. Check out the videos portion of my Facebook page to see what you missed.

But now it’s back to work. Literally. I need to get two books finished by the end of July when I head off to Orlando for RWA 2017 and hopefully have both ready to be presented to my editor. Plus I’m writing a new wedding series and trying to eek a little room in for that on most days. And it wouldn’t kill me to get back on track with getting Planet Fitness every day again. My butt is starting to get chair-spread again. Oh, and I knowknowknow I’ll be getting two books back any day from two editors for final and galley edits.

And please, I don’t want to think about all the books I’ve got to review for Netgalley and Goodreads.

Does this sound like I’m complaining? I hope not. I really love my life. Lovelovelove it!!

I just wish, sometimes,  there were 30 hours in every day instead of 24.

Yesterday was the first day of RT in Atlanta, and it was an abbreviated day. No morning sessions, or parties, or anything until 2:30 pm. I got my name tag, figured out all the rules and regs about the book signing, etc. I look a little cock-eyed in this picture, but I’m official, so that’s all that matters. 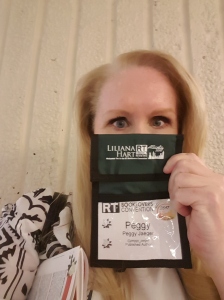 Since I’ve never attended an RT convention before, I attended what was called  RT CONVENTION VIRGINS. Yeah. It’s just like it sounds. A packed room full of people ( writers, readers, bloggers, industry folks) who have never….experienced RT before. You thought I was going to say something dirty, didn’t you? Admit it!. Anyway. It was an hour filled with stuff you need to know to have a good RT experience. The number one thing all the presenters said that will make your experience memorable and worthwhile? Stay hydrated by drinking lots of water.

Yeah…I know. Maybe it’s the nurse in me but I thought this was just something common sense-y everyone knew.

Apparently not. Stories of people fainting while standing in line or getting urinary tract infections ran the gamut during the talk. Okay. So, of course, I drank. A lot. But I do anyway.

The next thing on my agenda was something called Naughty and Nice. Hosted by a bunch of authors, it was supposed to be an hour of mingling with cover models, sampling Peach bellinis, and tasting dark chocolate. I say supposed because I never got into the event. The one thing I wish the VIRGIN committee would have told me was that you need to line up, like, an hour before the event starts ( hence the fainting, dehydration, yadayadyada). I got to the event space at 4:50 for an 5:15 start and already the line was into the next state. They only admitted 150 people and I was, like, number 482. So, yeah…didn’t get that experience.

Two sessions down and I’m feeling a little…let down. But not to worry. CINEMA CRAPTASTIQUE was on the agenda with the amazeballs Damon Suede. This one was a blast, peeps, especially since I helped stuff goodie bags for the participants and was able to include some of my swag!Anyway, the movie that was watched was the turkey GLITTER starting Mariah “I’m a DIVA from Hell” Carey. Damon ran commentary the entire time the movie was on and I can tell you I needed to change my underpants when I got back to my room because I laughed so much I peed a few times! ( all that f**king water to keep hydrated!)

Today is jammed packed as it’s the first full day of the event. I’m meeting with a potential Literary agent, attending a few classes and then a big party tonight that my publisher KENSINGTON is co-sponsoring called ROMANCE ROCKABILLY. I’m sure I’ll have lots to tell about that on tomorrow’s blog!

I’ll be posting pix and live Tweeting during the event so you can find me here if you’d like to experience RT life vicariously!!:Tweet Me//Read Me// Visit Me//Picture Me//Pin Me//Friend Me//Google+Me// Triberr

A little more ranting about #AirTravel

So, today is day 1 of RT2017. Registration is later and then activities and classes begin…more on that, well, later.

But first. After a long ass hauling day of travel ( see the previous blog) which saw me arriving in Atlanta, I made it to my hotel after waiting almost 30 minutes for my scheduled shuttle bus – don’t even ask! – up to my room and when I opened one of my suitcases, I found this:

The placard this was in was the luggage I had all my book swag and makeup in. Did the TSA really think I was going to commit mayhem with my business cards? Cause rampant panic with the handpainted shopping bags I painted MYSELF to give out during the FAN-tastic day event? Maybe they thought I’d knock someone out with the extra books I brought just in case I ran out at the official book signing, and not have any left for the Sunday event? Hmmmmm? I know – they probably thought I could do physical harm to someone with my eyeliner pencil.

Oh well. At least they didn’t confiscate anything. I would have really been pissed if my deadly mascara or eyeliner wouldn’t have been where I packed them.

This will be – I promise – the last rant for the week.

Getting ready to Rock and Roll; #RT2017 #ConferenceTime

In a few days, I’ll be leaving for Atlanta for my very first RT BookLovers Convention. For those who don’t know, RT (Romantic Times) is a major romance industry trade magazine – now e-zine -and every year they hold a conference that is attended by almost 600 romance writers and thousands of romance readers. This is, for lack of a better phrase, a totally READERS convention, whereas RWA is more ( I think) of a writers conference.

This will also be the first time I am doing a book signing for my new publisher, KENSINGTON/LYRICAL and I simply can not wait. For years I attended book signings as a reader just so I could meet and totally fangirl my favorite authors. This year — I am that author. It still amazes me daily to say and write that.

In addition to the Kensington signing and author meeting, I am also taking part in the grand book signing for the event. I received the floor plan for this and has luck would have it I am at a table right by the entrance, not tucked away in a back alley somewhere. Yowza!!! Now I know I don’t have a big name – or even a little one – yet and that any “fans” that attend will not be looking for me per se, but it would be nice to sell a book or two and garner a few new readers and reviewers, so keep your fingers crossed for me.

I’ve never been to Altanta but I’ve heard it’s a fun town and I know the RT gurus have planned numerous day and night trips in addition to all the themed parties for everyone, so I’m sure to be able to find something to do. My day is jammed packed with scheduled classes and meetings already, and I know pop-up events are a big thing at this conference, so I’ll be adding to the list daily.

And, of course, I’ll be blogging and live tweeting about it, too, so stick around and stay tuned.

in 2014 I attended my very first RWA conference. I got a book deal at that one and made the decision to retire to devote myself to writing full time. I’ve never looked back, so it will be interesting to see what this conference hold for me.