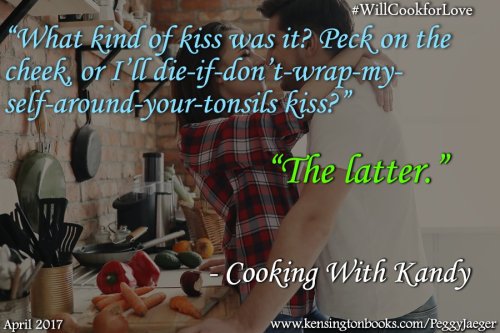 This meme is so appropriate for today’s #1stkissfriday edition because it’s from COOKING WITH KANDY and it’s about… a kiss!!! Hee hee

COOKING WITH KANDY is my  first book in the WILL COOK FOR LOVE series and introduces series “matriarch”  and cheflebrity Kandy Laine. When a private eye/bodyguard is hired to find out who’s stalking our favorite chef, sparks fly and love ensues, mixed in with a little eating, cooking, and romance. And guess what? The ebook is on sale now for just 99Cents for a limited time, so if you haven’t read it, now’s your chance!!

Kandy Laine built her wildly popular food empire the old-fashioned way—starting with the basic ingredients of her grandmother’s recipes and flavoring it all with her particular brand of sweet spice. From her cookbooks to her hit TV show, Kandy is a kitchen queen—and suddenly someone is determined to poison her cup. With odd accidents and threatening messages piling up, strong-willed Kandy can’t protest when her team hires someone to keep her safe—but she can’t deny that the man for the job looks delicious. . .

Josh Keane is a private investigator, not a bodyguard. But with one eyeful of Kandy’s ebony curls and dimpled smile, he’s signing on to uncover who’s cooking up trouble for the gorgeous chef. As the attraction between them starts to simmer, it’s not easy to keep his mind on the job, but when the strange distractions turn to true danger, he’ll stop at nothing to keep Kandy safe—and show her that a future together is on the menu. . . 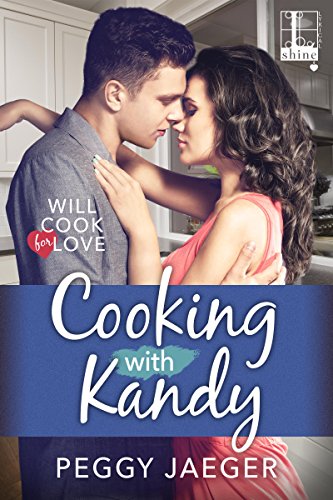 “You’re gonna wash the floor? Now?” He glanced down at his watch.

It was almost midnight.

“I never leave off cleaning my kitchen after a big prep,” she said, filling the bucket with hot water from the sink.

“Here, let me do it,” he said, taking over. “You’ve been going since four thirty this morning. It’s time for bed, Kandy. Go get ready. You’ve had a full, exhausting a day.”

She wouldn’t give him the mop. “I’m doing this, Josh. It won’t take more than five, ten minutes, tops.”

“Your work ethic astounds me. I can’t decide if you’re just plain stubborn or obstinate, but you’ll be no good tomorrow if you’re overtired and have a house full of company to entertain. And you still have stuff to do in the morning.”

“Kandy, it’s midnight. You need sleep. Rest. Now let me have the mop.” He put out his hand. She glared at it for a few beats and then ignored it, turning back to the sink to lift the bucket.

“Look, I’m not playing around.”

“Of course you’re not. You’re just naturally bossy and domineering. Well, here’s a news flash, Joshua Keane,” she said, dropping the bucket back into the sink, water sloshing out the sides. “I’m a grown-up. I do want I want, when I want. And I want to wash my floor. Now. You go to bed.”

Arms crossed, legs braced in a stance of defiance, he said, “You know, I weigh double what you do. I can just take that mop out of your hands. It wouldn’t be hard at all.”

She turned back to him, the blue in her light eyes deepening. “Go ahead and try,” she challenged, one hand on her hip in a stance of rebellion, the other gripping the mop handle.

They were standing toe to toe, each unwilling to bend.

Josh’s hand snaked out to grab the mop and Kandy effortlessly slapped it away. Without missing a beat, his other hand wound around her back, yanking her full force against his chest, the mop between them.

Kandy’s cry of surprise spit from her as she stared, wide-eyed, up into his face.

They were so close he could see the pulse beating at her temple as he stared down at her.

“Don’t challenge me if you’re not prepared to meet the consequences,” he said, his voice low and blunt.

She stared up at him, a sneer just beginning to form on her lips. “You don’t scare me.”

In the span of a heartbeat his head came down to hers, while she craned her neck toward him.

When their lips met the argument died.

He knew she’d feel like this, taste like this. Heaven. Pure and total heaven. Josh snaked his hands down her back, delighting in every curve and crevice he touched, to settle on her sweet ass. He swallowed her gasp against his mouth and gripped her butt, grinding her against his immediate, rock-hard erection.

When he felt her, soft, warm, and plastered against his body, he echoed her groan with one of his own.

He’d dreamed it would feel like this with her. Hot and spicy, delectable and scrumptious, just like her cooking. Her mouth was made for kissing, full and lush, swollen with need and desire.

Josh wanted nothing more than to eat her whole.

Clenching her even tighter, his lips left the mouthwatering taste of hers to wander across her cheeks, down to her chin. His tongue tasted the hollow behind her ear, his lips gliding across the silky skin of her neck.

He pulled back and stared down at her flushed and glowing face. Her eyes were closed, her lips parted, waiting for him to kiss her again.

She was, without doubt, the most beautiful, most desirable woman he’d ever seen.

She felt so good, so right, against him. As if they’d been created and carved for each other.

And he wanted her like he’d wanted nothing else in his life. But he knew he couldn’t have her. A cold fist of reality punched through his desire-drenched body. She needed him to protect her, not seduce her. The notion that she wanted him as much as he did her didn’t change that fact.

When she did he almost lost the small amount of sanity he still possessed and took her right there, braced against the sink.

Her beautiful blue irises were transparent crystals filled with heat and longing. Josh swore he could see to her very core; he could have melted into them without thought. Her gaze raked down his face to his lips, and she pulled a hand from his hair and traced a delicate line in the dimple under his bottom lip, just above his jawline.

Josh’s abdominal muscles contracted. He grabbed her hand, placed a chaste kiss on the open palm, and watched her expression change from captivated to confused.

Intrigued? Remember, it’s on sale right now for just 99cents! You can order your own copy here: Amazon

and if you want to know a little more about what I write, you can connect with me here:

Here’s the link to my TELL ME ABOUT YOUR DAMN BOOK podcast interview, just in case you missed it: TMAYDB

and the link to my recent interview on NewHampshirePublicRadio

And I can’t forget the OKRWA 2018 Award video