Authors will stop by every half hour and host the event – a total of twelve different authors! This is your chance to interact with the people who make love come alive and create Happily Ever Afters for a living.

It’s the ultimate Escape Into Romance while staying at home.

Here’s the link to join us: https://www.facebook.com/groups/LoveRRsRomanceRomp/

I’ve got some fun things planned, plus I’ll be telling you all about my new release, dropping 5.20.2020 and there will be chances to win free ecopies of some of my books!!!
Pass this on to all your friends who love romance and need a feels-good boost during these trying times!!! See you late, peeps. 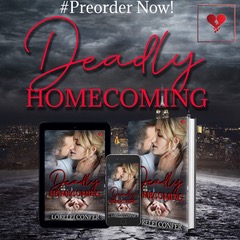 You all know I love having fellow authors on my blog. It’s truly my pleasure to give them a boost with promo and introduce them to readers who might not know about them. Today is an especially gleeful day for me because the writer I’m telling you about also happens to be my very first EDITOR at the Wild Rose Press. Lorelei Confer is the woman who changed my life for ever because she contracted for the WILD ROSE PRESS my very first book, Skater’s Waltz.

Lorelei has a new book out, DEADLY HOMECOMING and she’s also having a facebook premier party tomorrow, 2;18.2020 that I’ll be appearing at at 6pm EST. Here’s the link to the fb party: FBParty

The party starts at 10 am EST and goes until 8pm EST. Join a whole passel of authors for hourly stops. We’re playing games, giving away prizes, and having fun!

Madelyn (Maddy) returns home to arrange her mother’s funeral and has to face her biggest fear; her ex who broke her heart, but in oh so many more ways than one.

Garrett, her close childhood friend and FBI agent assigned to the human trafficking task force, gave his heart to her years ago and wants no other woman.

Does he have a second chance, or will her ex steal her from him again?

A little about Lorelei:

Lorelei Confer lives on a peninsula in the mid-west coast of Florida with her high school sweetheart, now husband, and AJ, her longhaired Chihuahua.

In the fourth grade, she wrote her first story—something about getting a shot at the doctors—that was produced by the teacher for parents and students in an assembly. When she was older, she spilled her guts in a journal every night and wrote long newsy love letters to Viet Nam.

She is a multi-published author of romantic suspense with two series: The Deadly series and the Saddle Creek series. She also has written numerous novellas and short stories.

She loves to hear from her readers so if you want to stay “in the know” visit her website, sign up for her newsletters and contact her.

You can find Lorelei Confer here:

Proof that I work hard…even if I never get out of my pajamas!

I was a little silent on Social Media over the weekend because I was flat out, ass crazy busy with writing stuff. I’ve got a sale going on right now for DEARLY BELOVED; I’m partnered on two Booksweeps  giveaways, one in Romantic Comedy , one in Sweet Romance, and I’ve got a ton of blog appearances set for the next two weeks in addition to other authors visiting my blog.  I got one newly contracted book back for edits, another I needed to finish and a third I needed to start.  This past Saturday and Sunday I spent all day, both days, playing catch up.

My husband, who still thinks when I say “I’m working,” means I’m sitting in my office trolling the Internet, for the first time understood what that meant.

You see, I write a detailed daily to-do list each week in a spiral notebook I keep on my desk. Each page is filled with what I need to accomplish for that specific date. This weekend there were 48 individual things on the list. He came into my office yesterday morning, saw the list on my desk and asked, “is that everything for next month?”

My reply? “No. Thats everything for today and tomorrow.” Then I flipped the pages and showed him the week ahead.

He won’t be asking anymore what I do all day.

I’ll be on from 4am EST until about 9 pm EST, so join me. I’ll have games, a few giveaways and lots more stuff!  Pleas join me and pass it on to all your book reading and romance loving friends.

Until next time ~Peg

There’s a big GRNAD PRIZE giveaway you won’t want to miss. You can click onto my fb page, here, to see how to enter.

I’ll be livelivelive from 5 -6pm EST here: FB PARTy for Learning to Love

So join me and the other wonderful authors at this party for fun, prizes, giveaways, and a chance to find you favorite new author!

I haven’t done one of these in a while and I’m really looking forward to it!

On Wednesday, 10.24.18, I’m one of 14 authors who are getting together to celebrate author Laura Boon’s current release THE MILLIONAIRE MOUNTAIN CLIMBER on a facebook live event.

The link is in the graphic above and will go live on the day of the event. Please join me on October 24, 2018 at 5:30 pm EST USA.  I’ll have giveaways, be asking cool questions, and I want to really engage with readers and followers, new and old friends alike! Looking forward to seeing you on the 24th!

Please join me and a few of my friends as we celebrate my uber-talented and wonderful writer and friend, Kari Lemor, tonight at her Book Birthday Party. One year ago Kari’s book WILD CARD UNDERCOVER released into the romantic suspense reading world and Kari’s never looked back, so we’re gonna celebrate her and her book birthday with a whole bunch of fun, prizes, games and giveaways tonight from 6pm-9pm EST.  Here’s the link to attend: Party

Hope to see you all there! Put on your party hat and dancing shoes!